With August almost behind us (just where is the year going?) I felt it time for an update on workshops and expeditions for the remainder of 2017 and into 2018 (with a sneak peak into 2019).

In a little under two weeks time I will be heading north to Greenland for two back-to-back expeditions to the remote east coast of Greenland. These expeditions into the remote and wild Scoresby Sund fjord system have been in planning for more than two years now and I am really looking forward to setting sail from Constable Point in Greenland to start our photographic expedition. Both of these expeditions have long been sold out, but I will be returning to Greenland in 2019 and will have more details on that expedition later this year.

After I finish in Greenland I am heading down to Antarctica for my White Nature expedition. Timed as the first of the season we have planned our expedition to take advantage of dramatic and variable weather as well as giant icebergs and lots of snow and ice. I have been travelling to Antarctica annually for many years now and have found early November to consistently offer the best photographic experience for all aboard. I recently published a full guide on how to choose the right photographic expedition to Antartica and it can be downloaded for free HERE. This expedition is sold out.

2018 will kick off with sold out expeditions to Lofoten for Winter landscapes and Iceland for Arctic Fox in winter. My last workshop to Lofoten was in 2016 and I am looking forward to returning to this incredible archipelago. The rising and precipitous mountains that climb directly out of the sea and the rugged coastal landscapes make for a photographers paradise. And of course, the chance of Aurora Borealis (northern lights) only sweetens the pot and adds that magic element to what is one of the most picturesque places I have ever been fortunate to visit and photograph. 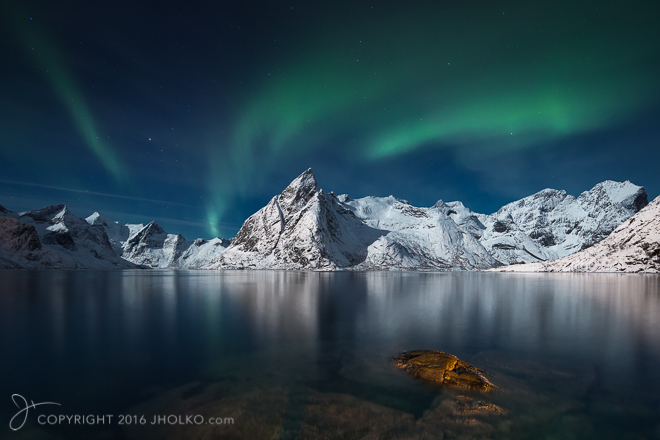 My annual expedition to photograph Arctic Fox in winter in the remote and wild Hornstrandir reserve in Iceland has also long been sold out (Read the 2017 Expedition Report). I will be returning to Iceland in 2019 for this expedition and am now taking expressions of interest from those interested in photographing this incredible survivor. I will have full details including dates and costs for 2019 soon.

After Iceland I will travel to Svalbard to lead a winter expedition north of Longyearbyen in search of polar bears and dramatic winter landscapes. Svalbard in winter is an absolutely breathtaking location. With newly formed sea ice, snow and ice covered mountains and chance encounters with the worlds largest land predator in a stunning white environment this expedition rates as one of my absolute all time favourites (Be sure to check out the Expedition Trip Report from March this year). At this stage there are still a few places remaining before the expedition will be sold out. If you are interested in joining us and exploring the winter white wonderland of this Arctic archipelago you can register your interest by dropping me an email. The remaining places are filled strictly on a first come, first served basis. To get an idea of what winter is like in Svalbard be sure to check out the new Ghosts of the Arctic short film by clicking on the image below.

In late April / Early May I will lead my annual New Zealand South Island Masterclass workshop. This will be the last year I offer the South Island workshop as I plan to switch gears in 2019 with a brand new Van Diemens Land Tasmania Landscape workshop that will also include an optional extension to the Great Ocean Road in Victoria Australia (more details on this to come at a future date). The New Zealand South Island Masterclass has been an eagerly anticipated workshop over the last few years. For the final year my co-leader Phillip and I are including even more helicopter time over the spectacular southern alps with doors off photography to enable us all to capture some truly stunning imagery. Strictly limited to just six participants there are now only a few places remaining before the workshop will be sold out.

Earlier this year, Daniel Bergmann and I completed a brand new workshop to photograph Atlantic Puffins and other Arctic birds at several different locations in Iceland that included the remote northern Grimsey Island, inside the Arctic circle. (Read the trip Report). The workshop was a great success and as such we have decided to offer a new workshop in May next year that will take us back to Grimsey Island to photograph both the wildlife and incredible landscape of this remote island. As well as Grimsey Island we will also spend time in Myvatn in the north of Iceland – One of the best places in the world to photograph Arctic birds. Grimsey Island in particular is one of the most spectacular locations I have visited in Iceland with towering cliffs that rise hundreds of feet out of the ocean and incredible basalt columns. It is a wild and primordial landscape that is rarely visited and even less rarely photographed. If you are interested in photographing the loveable and comical Atlantic Puffin and other Arctic bird species this workshop is not to be missed. Only two places remaining before the workshop will be sold out.

In July I will return to Svalbard for my annual summer Polar Bear expedition. This expedition has been designed from the ground up to provide the very best possible opportunities to Photograph Polar Bears in their natural environment. With the reduction in Arctic sea ice the Polar Bears in Svalbard are dwindling in number and the number of years left to photograph them is unfortunately now extremely limited. Late July and August are the ideal times to photograph Polar Bears north of Svalbard due to the dwindling ice around the archipelago. On this expedition we will be carrying a naturalist/biologist who specialises in locating Polar Bears and an expedition leader and captain who have years of experience in placing us in the ideal position to make the best photographs. Their expertise will allow us to approach the king of the Arctic as closely and safely as possible and make incredible photographs under the spectacular midnight sun. To get an idea of what this workshop entails be sure to read the 2016 trip report.

In October I will return to the gigantic sand dunes of Namibia for a new Desert Fire Safari. This will be my fourth visit to Namibia to photograph the ancient sand dunes of the worlds largest and oldest desert. It is the perfect juxtaposition to my usual polar landscape and wildlife photography and offers an alternate landscape of extremes. Our workshop will sea us visit the giant red sand dunes of Sossusvlei, the eerie ghost town of Kolmonskop as well as the relentless Skeleton coast and the Etosha wildlife reserve. Places are now limited. For more information please send me an email.

Finally in November 2018 I will return to the sea ice of Gould Bay in Antarctica for my Emperor Penguin expedition (Read the 2016 Expedition Report). There are plenty of species the world over that are much harder to find than Emperor Penguins.  To my knowledge however, none is as difficult or as expensive to reach as the Emperor Penguin; and thats the conundrum of Emperor Penguin photography. We know exactly where they are located, we just cant get to them without great difficulty and significant expense. Living on the sea ice in remote and difficult to reach areas of Antarctica the Emperor Penguin is therefore as difficult to reach as the enigmatic snow leopard is to locate in the wilds of its mountainous territories. This expedition will see us fly to Union Glacier deep in the Interior of Antarctica where we will set up our base camp before we take smaller twin otter aircraft out to the sea ice for our advance camp where we will live with the Emperor Penguins during our time on the sea ice. Strictly limited to just eight photographers there is only one place remaining before the expedition will be sold out (Read the 2016 Expedition Report).

Peaking into 2019 I will be leading a brand new workshop to the north of Finland in February in search of Golden Eagles, Hawk Owls, Wolves and wolverine (full details coming very soon). The workshop is going to include a significant amount of photography from private hides and will afford opportunities to photograph rare species not often seen and even less often photographed. I am not quite ready to start taking bookings for this new workshop but you are welcome to register your interest by dropping me an email.

A final sneak peak into 2019 includes a new workshop to photograph the landscapes of Van Diemens land (Tasmania) with an optional extension to the Great Ocean road in Victoria Australia. More details to come soon….