For those who are interested in a future expedition to the remote north of Iceland to photograph Arctic Fox in a beautiful winter setting I have put together a short Adobe Spark Presentation and Website  with some teaser photographs and some information on the expedition. Of course, more photographs are also available on my website at www.jholko.com.

As a direct result of the ongoing COVID-19 crisis that originated in China and the continual travel bans and closure of countries around the world my 2020 Polar Bears of the High Arctic expedition to Svalbard is being delayed until 2021. Full details are on my website in the Workshops link. 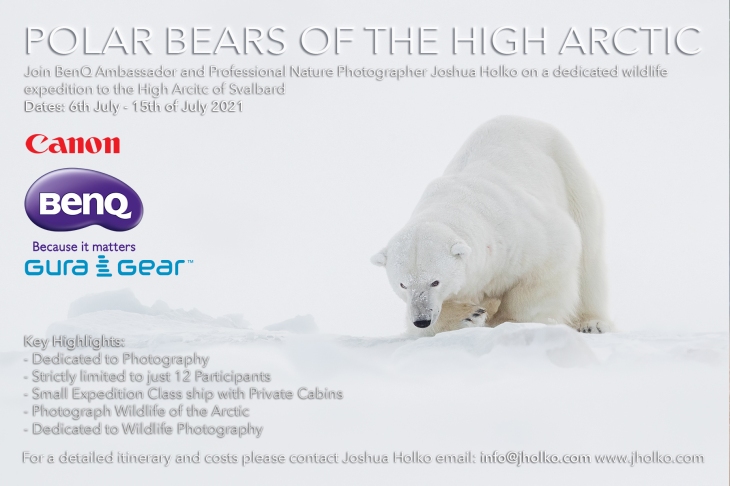 Today I am releasing a small re-edit (Directors Cut) of my Ghosts of the Arctic short movie (with thanks to Abraham Joffe and Untitled Film Works). In the original cut we had included some audio that incorrectly identified the polar bears as a mother and a cub, where as the are actually a large male and female. At the time of filming I was so excited to have such a wonderful encounter that I made the identification mistake. This error has been corrected in this final revised cut.

Forward: As a direct result of the COVID-19 Virus that spread rapidly across the world from Wuhan China in early 2020 both my Polar Bear and Musk Oxen expeditions were unfortunately cut short. Some of us did make it to Greenland before the country closed its borders to further inbound traffic and the time we had there during our expedition turned out to be an experience of both extreme highs and lows. What follows is the trip report for our experience during the expedition.

To date, and to my knowledge no one else has tried to mount a commercial operation to bring photographers to the East Coast of Greenland in Winter to try and photograph wild Polar Bears on the sea ice or Musk Oxen in Jameson land. I have done countless expeditions to the East-coast during Summer and Autumn, but this was the first time I have travelled to Greenland during the Winter months. There were many challenges with this scouting expedition – both logistical and political. Through my Iceland contacts I was able to put together the logistical pieces that made mounting the expedition possible, but the political challenges once on location proved more problematic than I had hoped and envisaged.

The expedition began in March of 2020 with a flight from the northern town of Akureyri in Iceland to the East-coast of Greenland and the small snow covered airstrip at Constable Point (a flight across the Denmark Strait of approximately one and a half hours). From Constable point we took a waiting helicopter to the small Inuit town of Ittoq. and from there we used pre-prepared snow mobiles to access our private cabin at the remote Cap Tobin area. Cap Tobin is the ideal place to encounter Polar Bears in the winter months as they migrate past the exposed point of Scoresby Sund on the frozen sea ice. It is also a wonderful location for Arctic Fox, Walrus, Narwhal, Ptarmigan and the beautiful white GyrFalcon. In short, the area has huge photographic potential for wildlife, that during the winter months at least, has been more or less completely untapped. Cap Tobin itself is a small abandoned town of approximately a dozen cabins that is now only utilised by local Inuit for their hunting practices. Through my Iceland contacts I was able to secure one of the better cabins for us to use as a base for our daily excursions in search of wildlife. The feeling of being in such a remote and beautiful place in winter was truly extraordinary and was the topic of much discussion and pleasure during our stay in the cabin.

Temperatures during our expedition hovered consistently around -25º Celsius with wind chill frequently dipping them below -35ºC. We experienced everything from bright sunny days to heavy overcast and white out conditions. On the whole, the weather was extremely co-operative and were fortunate to be able to really maximise our time in the field as a result.

It is important to note at this point that Polar Bears are still hunted on the East-coast of Greenland by local Inuit who have the legal (but appalling) right to kill a significant quota of polar bears annually (35 bears this year on the East-coast in just the small area we were visiting). Despite my express moral and vocal objections to this practice the simple reality is that the law is on the side of the Inuit and there was absolutely nothing I could do to persuade the hunters from killing the bears. I utilised a local contact as an intermediary during our time in Greenland and even tried bribing the hunters with very significant cash offers in excess of several thousand USD not to shoot each bear. Although there is no requirement for bears to be killed for food (there is plenty of food available in Ittoq. supplied and subsidised by the Danish Government) the disgusting practice continues under the thinly veiled guise of ‘tradition’. This is a truly appalling situation that the Danish government needs to be held accountable for. Polar Bears are a highly endangered species and the killing of them should be a criminal offence punishable by jail. It was my sincere hope (and dream) that I could try to educate the hunters that if you shoot the bear with a gun that there is no business, but if you shoot it with a camera then business is just getting started and that there was and is potentially much greater financial reward to photographing the bears rather than shooting them. In the end, despite all my concerted efforts to communicate and educate the hunters, the most I was able to achieve was an understanding that the hunters would at least call us if they found a bear (in exchange for $800 USD per bear) and provide us an opportunity to photograph it before we would be forced to withdraw and the hunters would engage and kill the bear. I found this both ethically and morally unacceptable and abandoned further efforts to work with the local hunters and instead made the decision to make our own daily excursions further afield in search of Polar Bears.

I want to make it loud and clear that although it is illegal for the local Inuit to sell Polar Bear products that they are doing so, and that those products (such as the fur) are being exported back to Denmark. This process needs to be immediately halted and laws put in place to protect all Polar Bears from hunting. 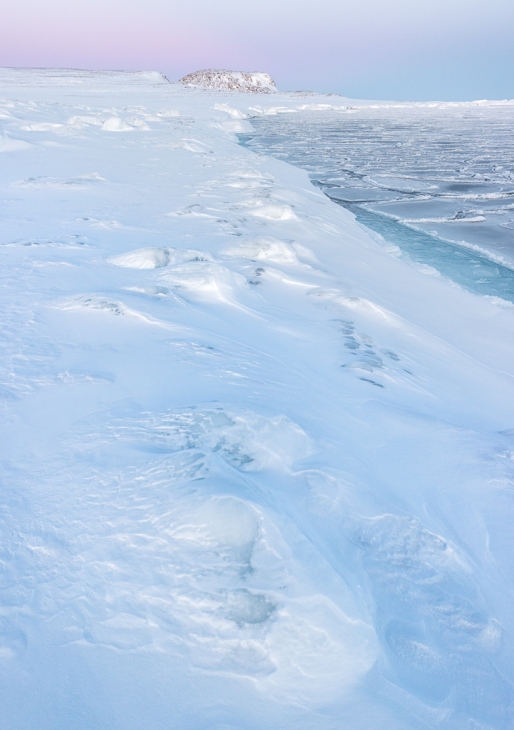 I do also want to make note that the local Inuit shot and killed both a Walrus and a Polar Bear the day before our arrival at Kap Tobin. They subsequently shot and killed a second Polar bear on our first day in the field less than two kilometres from where we were searching the ice. Unfortunately, the Inuit spotted the bear before we arrived and refused us the opportunity to not only photograph it, but to even approach closer than our distant vantage point for fear of scaring the bear away. They then proceeded to hunt the bear with dogs, running it down and shooting the exhausted bear on the sea ice. I personally watched the entire scene unfold through my binoculars. I then watched the triumphant hunter return on his sled atop the dead polar bear with huge grin on his face. I make no bones when I say that the entire process left me disgusted and sick to my stomach. My personal feeling and reading of this situation was that the Inuit wanted to make the point that this was their land and that they can do what they like. They wanted us to know that ‘they’ are in control and that we have no say in what happens. In this instance, no amount of money was going to dissuade them from killing the bear. Whilst they did successfully make this point, they also successfully ensured that any respect I had for them and the Danish government (that allows this to continue) is now gone.

We subsequently spent the next five days far away from the hunters searching the frozen landscape and sea ice in search of Polar Bears and although we did encounter very fresh tracks from a mother and cub we were unable to find them. We tracked them for many kilometres across the landscape as they moved from bay-to-bay before loosing the tracks in an elevated rocky area where we were unable to follow with our snow mobiles. Although we did not find the bears it was nevertheless very exciting to see that there was a mother and cub active in the area. I am told the hunters do not shoot bears with cubs, but I was nonetheless very pleased to know that the tracks were leading well away from the area the hunters are frequenting. We tracked a second mother and cub (and large male) on our last full day in the field, but unfortunately they entered the same rocky area and we were unable to follow.

During our days in the field we took the opportunity to also photograph the incredible winter landscape. Quite honestly, the East-coast of Greenland in winter is the most spectacular landscape I have ever been fortunate to experience. It is truly both extraordinary and other-worldly. The landscape opportunities proved a major boon during the expedition and we very much enjoyed photographing the wonderful sea ice patterns and frozen landscape. 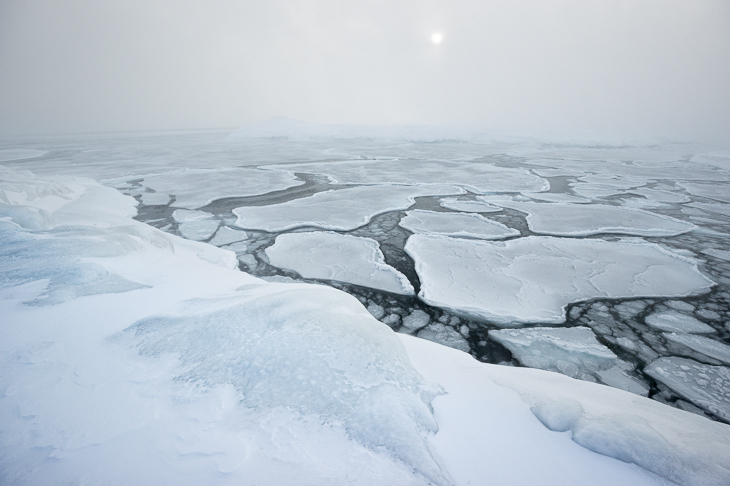 With the COVID-19 situation continuing to develop at a rapid pace across the rest of the world we then made the group decision to cut the expedition short and return to Iceland for further onward travel. Through my local contact I was able to arrange for our flight to come in early and we then reverse engineered ourselves back to Iceland where we concluded our expedition.

The potential to photograph Polar Bears, Walrus, Musk Ox and more wildlife on the East-coast of Greenland in winter remains. I still believe the potential in this area to be untapped and truly extraordinary. The frozen landscape is breathtaking and as I sum up this trip report I find myself feeling immensely blessed to have had this opportunity and find myself already yearning to return to this remarkable land during the winter months. Although there are easier places in the world to find and photograph Polar Bears I have not as yet experienced any location anywhere on the planet that offers such an incredible back drop to Polar wildlife.  It is for this reason that I will almost certainly return in future years for subsequent expeditions – both to try and photograph Polar Bears and other wildlife in what I believe is the best setting on earth, but also and importantly to continue to try and educate the local Inuit that they do not have to kill Polar Bears to make a business transaction.

In relation to the local Inuit, I do believe it highly unlikely anything will change with their hunting practices until such time as the Danish government steps in to stop the practice. On a positive note the number of Inuit hunters is slowly decreasing and although it will take time, the practice ‘may’ naturally die out as people move away from the small village of Ittoq. for larger towns and cities. In the meantime, I will continue to do what I can to bring attention to current practices and to photograph this magnificent apex predator in the beauty of its natural environment with other passionate wildlife and nature photographers whenever and wherever I can.