The photograph of the month for December 2020 comes from Finland during one of my expeditions to photograph Wolves and Wolverines late in Autumn (Read the Trip Report). This photograph is a great example of when it is ok to break the rules and place the subject dead centre of frame. The use of negative space to either side of the wolf helps to frame the animal and provide some context for its environment. The extremely low angle of view and soft foreground were obtained by utilising a ground level hide and by shooting the telephoto lens almost wide open. This photograph is also the cover shot for my new book Never Cry Wolf, that is now available to pre-order through my online store Melrakki Publishing.

The photograph of the month for November 2020 comes from deep in Antarctica during one of my expeditions to photograph Emperor Penguins at Gould Bay. This was a photograph I initially overlooked in my early edits and only recently discovered and processed. I am not quite sure why I missed it in my first editing passes, but it is a photograph I am extremely pleased with. The combination of golden light with soft cool snow and the juxtaposition of the adult and chick really work well together. The key to these type of photographs is patience. Once I find the wildlife I want to work with and have chosen the background it is then a matter of setting up and waiting for the right gesture or moment. In this case, the call of the adult Emperor and the lowered head of the chick work perfectly in opposition to each other.

The photograph of the month for October 2020 comes from Finland and is of a wild grey Wolf emerging from the forest bordering northern Finland and Russia. Photographed during my Finland wildlife workshop in September last year (Read the Trip Report) from a small portable photo blind, this photograph will be included as a limited edition print with the first 100 orders of my new book ‘Never Cry Wolf’; which will very shortly be available for Pre-order.

The photograph of the month for September 2020 comes from one of my winter snow mobile expeditions to Svalbard to photograph Polar Bear on the frozen sea ice. This large male Polar Bear is at full speed on the ice at Monbukta as it chases after a nearby female. Capable of explosive bursts of speed covering around 100 metres in just seven seconds the Polar Bear is the only living marine mammal with powerful, large limbs and feet that allow them to cover kilometres on foot and run on land. 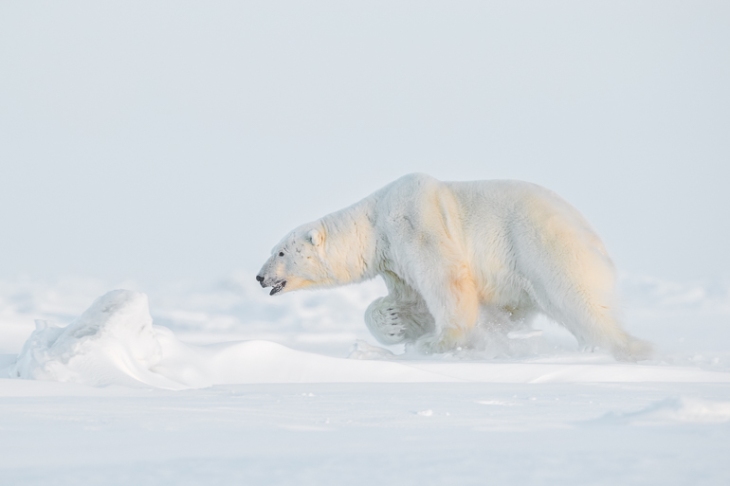 This photograph of a Grey Wolf in no mans land between Finland and Russia was taken late last year from a private hide I had set up in an area the wolf pack was frequenting. Shot on the very cusp of winters arrival, the Autumn colours have faded and we are presented with a soft pastel forest beginning the inevitable transition into to its winter coat. The muted colour pallet really speaks to me, along with those wonderfully piercing eyes of the wild Wolf. 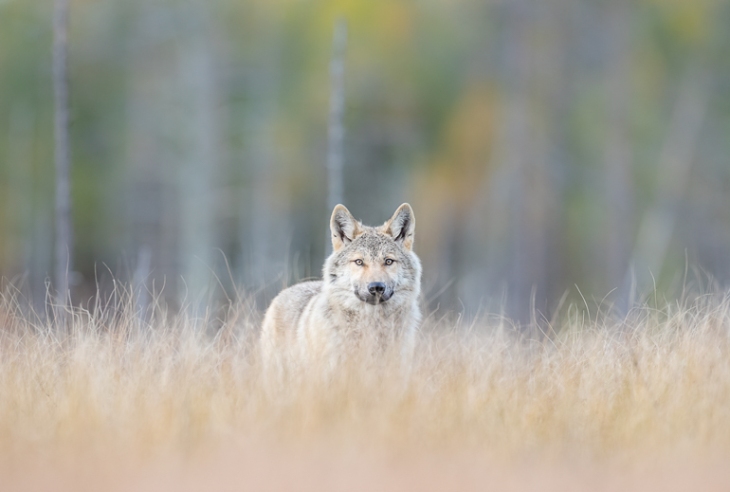 The photograph of the month for July 2020 comes from my Mongolia expedition to photograph the Pallas cat in November of 2019 (Read the trip Report). This photograph, my favourite from my Pallas cat portfolio, also recently took out second place in the 2020 AIPP Silver Lining Awards Wild Category. It is perhaps not widely known, but Pallas Cat are preyed on by large birds of prey such as the Golden Eagle and as such they tend to hide themselves in rocky outcrops and tall grasses. The challenge with this particular image was in positioning myself in such a way that I could clearly see the cat through the grasses. I wanted to achieve symmetry by placing the cat dead centre of frame, but I also wanted to use the grasses to help frame the cat and add environmental context.

The photograph of the month for June 2020 comes from my Finland workshop in September last year (Read the Trip Report). I posted a landscape image from Finland as my April image of the month and really wanted to follow up with a subsequent landscape photograph. Like the April photograph, this image was taken very early on a still morning with rising fog by the side of a placid lake near our cabin. The soft distant trees in combination with the soft grasses, silhouetted trees and monochromatic colour palette work to portray a gentle, quiet and tranquil scene.

The photograph of the month for May 2020 comes from my Finland workshop in September last year to photograph Wolves and Wolverines (Read the Trip Report). Photographed from a ground level hide in no mans land between Finland and Russia during the first late Autumn snowfall; this photograph captures for me the very essence of a wild wolf. The gesture with the raised paw and angle of attack of the animals head in combination with the intense glare makes for a powerful and emotive photograph. 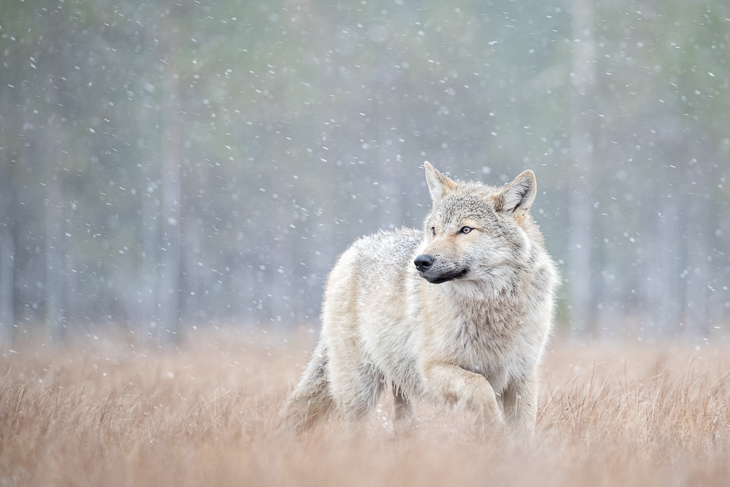 The photograph of the month for April 2020 comes from my Finland workshop in September last year. It has also been a while since I have posted a landscape photograph as my image of the month. Taken very early on a still morning with rising fog by the side of a placid lake near our cabin this photograph epitomises for me the peace, tranquility and silent beauty of the Finland forest in Autumn. This photograph really works for me on an emotive level. The soft distant trees in combination with the still lake and contrasting reeds gives a strong sense of peace and tranquility.

The photograph of the month for March 2020 comes from my recent expedition to the Ross Sea region of Antarctica (Read the Trip Report). The photograph was actually taken at Enderby Island in the Sub Antarctica islands on our way to the Ross Sea and is of a very rare and highly endangered Yellow-eyed penguin. I watched this penguin for a long time in trying to figure out how I wanted to photograph it and what it was I wanted to try and say about the Penguin and its environment. In the end, I opted for a very shallow depth of field with a 400mm f2.8 lens that really put emphasis on the striking yellow eye but still maintained a sense of the environment in which the penguins live. It is estimated that there are now fewer than 8000 pairs of Yellow-eyed Penguins left in the world; making them the worlds most endangered penguin.

This photograph of a Pallas Cat stalking in the snow was made in Mongolia last November 2019. It was only possible due to a number of different circumstances which conspired in my favour – it was at the end of the day nearly pure serendipity.  Firstly, my guide and I found the cat not long before sunset, just as the light was becoming optimal. We had been searching the lunar-like landscape all day in search of a cat and had found only tracks. Then with less than an hour before dark we discovered this cat. I asked my guide to go around the cat and to approach its position slowly from behind. I then went and lay down in front of the cat some hundred metres or so away. I was wearing full winter camouflage clothing and once I was lying down in the snow was virtually invisible. The cat had no idea I was there until it was less than 20 metres away.

The photograph of the month for January 2020 comes from my recent trip to Mongolia in winter (Read the trip Report) to photograph the rare and elusive Pallas Cat. Known affectionately as the ‘Grumpy Cat’; this Pallas cat did indeed seem quite moody when I took its photograph in the late afternoon winter light. It was a very deliberate creative decision to frame this photograph with angled back light as I wanted both the benefit of the golden rim light on the fur of the cat, but also to retain all of the detail in the cat and not send it to silhouette. It seems even when the light is at its most stunning the Pallas cat is still grumpy…