I am currently making my way back home from Antarctica and an absolutely superb expedition to the remote sea ice of Gould Bay where I was guiding an expedition to camp with and photograph the mighty Emperor Penguins. I will have a full trip report in a couple of weeks once my feet hit the ground and I have had a few days to catch up on jet lag, but in the meantime I can say it was a truly incredible and life-changing expedition on many levels.

It therefore feels appropriate that my photograph of the month for December 2018 is from a previous expedition to the sea ice of Gould Bay. Photographed well after midnight with the setting sun back lighting the flying snow as an Emperor Dances in the golden light. What really works for me is the quality of the light, the flying snow, the penguins gesture and the soft folds of the ice and snow in the background. It was a deliberate choice to use a fairly slow shutter speed to catch just the right amount of blur in the penguins wings and snow to help give a sense of movement which helps bring the photo to life. These sort of conditions can be very difficult to work in when you are cold and tired, but if you make the effort the rewards can be truly wonderful.

The photograph of the month for November 2018 comes from my 2016 expedition to the remote sea ice of Gould Bay in Antarctica to visit and photograph the Emperor Penguins (Read the Trip Report). This particular photograph remains one of my favourites from  this expedition. It includes the main Emperor colony  with the small fluffy chick leading the line of penguins that recedes off into the distance.

The photograph of the month for October 2018 comes from my recent trip to northern Finland. I had travelled to Finland to speak at the Nature Photo festival in Kuusamo (which was a fantastic event with some wonderful photography). Since Finland its such a long way from Australia (four flights each way) I decided to extend the trip by a few days and take the opportunity for some photography.

This photograph was made just near the northern Russian border with Finland from a small photo hide just near dusk. I was extremely fortunate to have this large Wolverine come very close to the hide just as the light was beginning to turn warm and golden. This sort of encounter doesn’t happen very often with wildlife and I had quite honestly expected to have to spend many hours or even days in the hide to catch a glimpse of a Wolverine. As it turned out I did not have to wait more than a couple of hours and was able to capture this wonderful moment with the Wolverine quite close to my hide position. What really works for me is the warm golden light catching the fur of the Wolverine and of course that wonderful moment with the huge paw (and claws!) on the log. 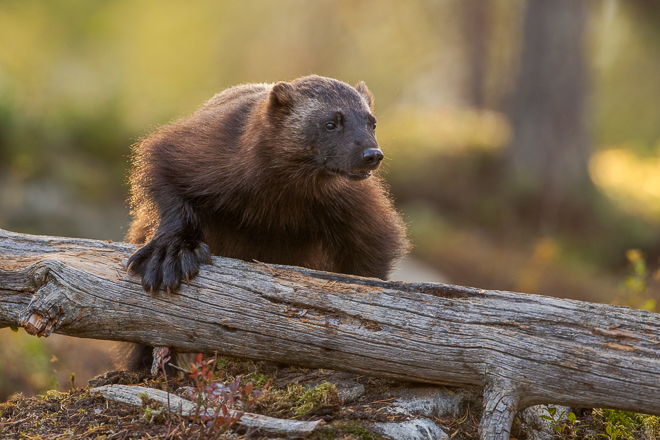 The middle of September has rolled around and its high time for the photograph of the month. This photograph from my Polar Bears of Svalbard expedition this July and August. What I really love about this photograph is the sense of environment and space in which the Polar Bear lives. If memory serves correctly I think it was close to midnight when I took this photograph. The light is soft and ethereal and there was a light fog that just softened everything beautifully. The Polar Bear was wandering up and down the ice flow and paused for just a moment in just the right place for this photograph. This was quite close to our expedition ship and I was able to make this image with just a 24-70mm F4L IS lens.

I returned home to Australia very early this morning from my Svalbard Polar Bear expedition (trip report coming soon). With jet lag already hitting hard I decided to take the opportunity and do a quick blog update with the photograph of the month for August 2018 – An aerial photograph of the Skeleton Coast in Namibia. It was taken during a ‘doors off’ helicopter photography session over the golden dunes just after sunrise. One of the most enjoyable aspects of this sort of photography over the desert is the incredible light found both in the morning and evening. With the sun at a low angle in the sky the shapes, shadows and textures of the dunes are emphasised as they glow with soft light. 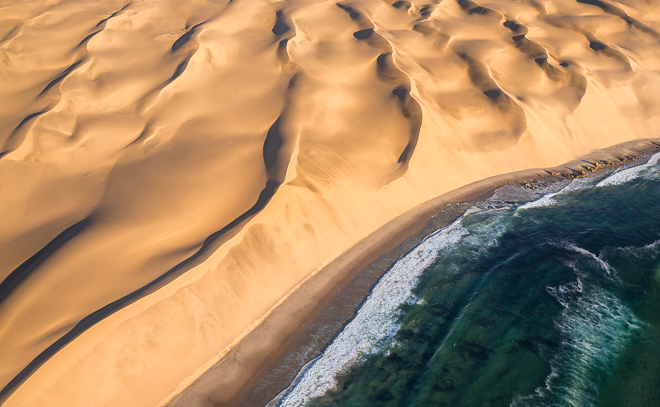 The July photograph of the month was taken on my Winter Svalbard expedition this March (Read the Trip Report) and is of the full moon rising over the snow and ice covered Arctic mountains. I almost missed this opportunity – or rather, it is perhaps more accurate to say I owe a debt of thanks to Chris who remained outside to watch for the rising moon whilst the rest of us went inside for a warming drink. We had waited outside for over an hour for the moon to rise and had all but completely given up when Chris came inside to alert us that the moon was finally making an appearance over the mountains (thank you Chris!). 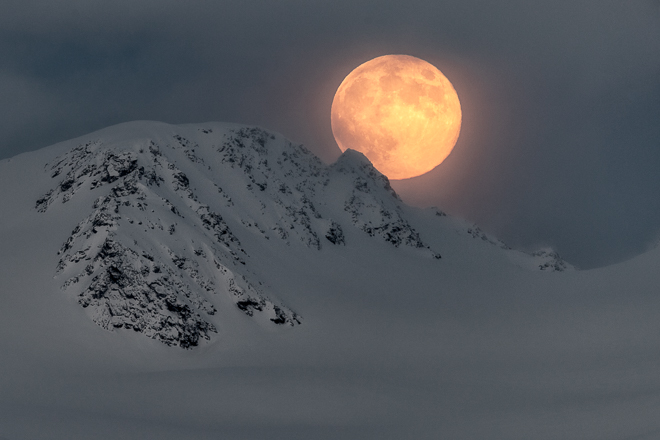 The June photograph of the month was taken on my recent New Zealand South Island Masterclass (Read the Trip Report). We were driving from the small town of Fox Glacier to Greymouth on our last full day and had just left town after breakfast. We rounded a bend in the road when I noticed the wonderful cloud and mist swirling amongst the trees and mountains. We immediately pulled over for a drive by shooting session and the following image resulted. The great thing about this sort of cloud and mist is it is constantly changing as it swirls amongst trees and mountains. I made a number of different exposures over a period of perhaps two minutes, but this is the one that best captures the feeling and drama of Middle Earth. In print this image absolutely swings with wonderful delicate tones in the clouds, mist and trees.

I have been wanting to photograph Ptarmigan in their winter plumage in some nice clean snow for some time now and finally got my chance this Winter in Svalbard. This was one of three Ptarmigan that were feeding on some patchy snow covered ground just outside the small town of Longyearbyen. To make this photograph I simply positioned myself down low to try and get the bird on the clean snow. Seasonally camouflaged; the Ptarmigan’s feathers moult from white in winter to a mottle brown in spring or summer. In winter, its plumage becomes completely white except for the small patch near the eye.

Taken during my summer expedition to Svalbard in 2016 and photographed from zodiac, this very curious young cub was running up and down the edge of the pack ice closely watched by its mother. We photographed this duo for the better part of an hour in soft overcast light. Encounters such as this are rare and fleeting in the Arctic and this remains one of the best and most intimate encounters I have been fortunate to experience whilst photographing these magnificent bears. 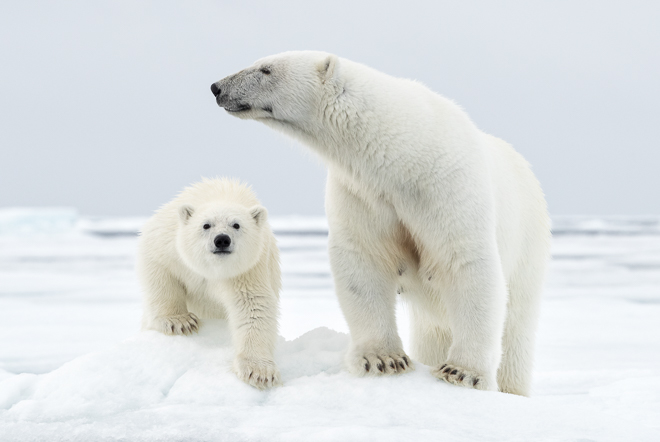 The photograph of the month for March 2018 was taken on my 2017 Svalbard Winter expedition (Read the Trip Report). Photographed from the deck of our expedition ship this wonderful landscape of broken sea ice and distant mountains surrounded us as we cruised through one of the many fjord systems of the archipelago. This sort of landscape photography from expedition ship is a wonderful way to experience winter in Svalbard. With the convenience of the ship its possible to simply step onto the outside deck to make some photographs and then retreat to a hot drink and warmth of the ship lounge at your leisure. Its perhaps the ultimate in ‘sip-click’ photography.

Winter in Svalbard is magical. The landscape is plastered in fresh snow an ice and the sun is low in the sky which provides wonderful opportunities for golden light in a winter setting. What appeals to me particularly about this image is the sense of place, the wonderful depth and the slight hint of distant warmth from the suns rays over the far mountains. 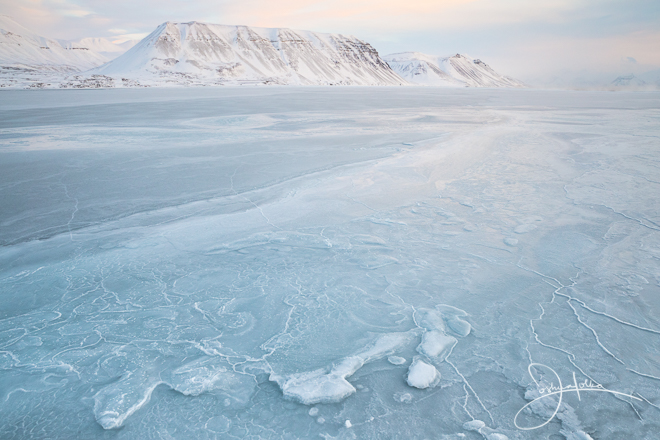 The photograph of the month for February 2018 is of a blue morph Arctic Fox stalking across a snow bank with the late afternoon sun gently painting the snow in gold light. This was my favourite photograph from my 2017 expedition to photograph Arctic Fox in the north of Iceland (Read the Trip Report). This photograph works for me on several different levels. The fox is in classic stalking pose and is beautifully positioned on the snow bank in wonderful golden light. The blowing snow really adds drama to the photograph and we have a wonderful sense of the space and environment in which the fox lives. When I framed this in camera I was extremely careful not to clip the fox’s shadow; which would have resulted in the eye being led out of the frame. It is a photograph that gives us just enough sense of the environment to leave us wanting more that is one of the keys to any successful photograph.

The first photograph of the month for 2018 was from my most recent Antarctica White Nature Expedition (Read the Trip Report).  Taken at Cuverville Island with the Canon EOS 1DXMKII and Canon 300mm f2.8L IS MKII, this photograph was the result of just a little bit of patience. I knew I wanted to use the dramatic spires of the distant mountains to help give me a great sense of scale and environment. It was then just a matter of waiting for a lone penguin to walk across the ridge line. As it turned out I did not have to wait very long for this little guy who stopped right in the middle to pose.