This July and August 2018 I lead my annual expedition north of Svalbard in search of Polar Bears, Walrus, Arctic Fox and of course spectacular Arctic landscapes – Polar Bears of Svalbard. With our small group of just twelve photographers and our ice hardened expedition class ship we were perfectly prepared for ten days of Arctic photography under the midnight sun (it turned out to be an absolute gem of an expedition). July and August are just a fantastic time of the year to visit Svalbard. With twenty four hours of daylight (the sun never sets this time of year) the opportunities for photography are literally non-stop and we took advantage on many occasions to photograph late into the evening and early hours of the morning. Working late into the night (when the sun is still low in the sky) not only extends the amount of time available for photography but it also offers the opportunity to work in a variety of lighting conditions. Typically late evening and early morning provide the softest light in Svalbard this time of year. With the option of working through the night we also have the luxury of being able to choose the best time of day or night to photograph in a given location. 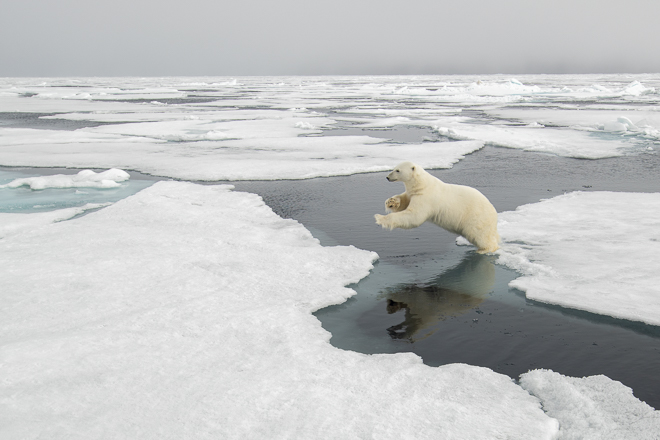 This year we had to go well north of 82º degrees to reach the edge of the permanent pack ice, with our northerly most position being 82.5º north according to the GPS in my Canon EOS 1DX MKII (less than 900 nautical miles from the North Pole). This was the farthest north I have ever had to travel to reach the edge of the ice and was a clear indication of just how rapid and how devastating the summer melt has been this year. As tragic as it sounds, I believe we may now be less than a decade away from an ice free summer in the Arctic. What this means for the Polar Bear remains to be seen; but one thing is for sure, without sea ice to hunt the future of the Polar Bear is in serious question. 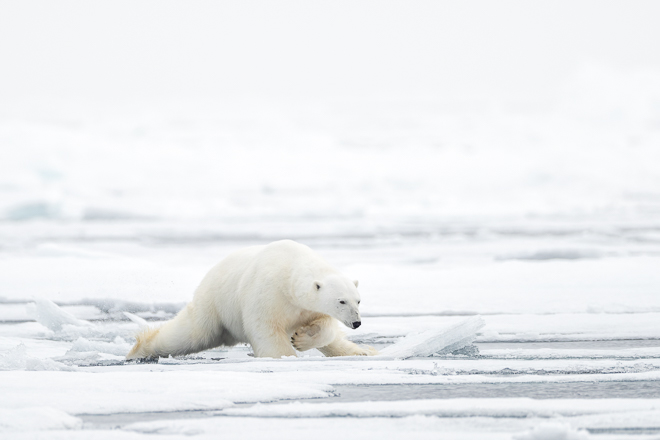 We were lucky to experience favourable weather for photography during our expedition, encountering only minimal fog and only a small amount of swell on our journey north to the ice. One of my biggest fears for weather in Svalbard at this time of year is zero visibility because of giant fog banks. Whilst I love fog and find it extremely photogenic it can also be massively problematic in Svalbard in summer. Finding bears in the ice is extremely difficulty with good visibility; finding them in heavy fog is just about impossible. My other fear for weather is ‘blue sky days’ which creates contrast that is just far too strong for artful photography. Thankfully we experienced only a couple of blue sky days with the majority of days during our expedition being heavily overcast; making for superb photographic conditions. 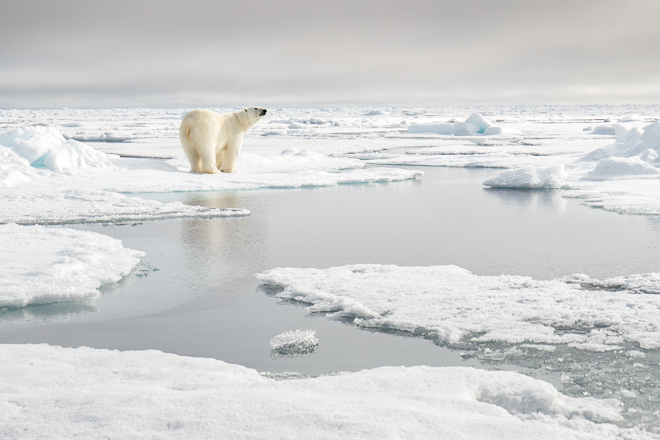 This year we were extremely fortunate with our bear encounters; encountering a total of eighteen bears during our ten day expedition. Our first encounter was at the island Karl the XII (on our way north to the ice) where we found five bears stranded south of the ice on the small island. Whilst this was an easy tick for five bears for those who had never seen a Polar bear before the photo opportunities were not the best. I find Polar bears on land to be not the most photogenic of subjects and very much prefer to photograph them on the ice in their prime.  Fortunately, the majority of the rest of the bears we encountered turned out to be fantastic photo bears with wonderful close encounters around our vessel in the ice. Several of the bears came right up to the ship to satisfy their curiosity and we were able to spend many hours of fabulous photography with these apex predators.

In addition to bears on the ice we also had two encounters with Polar Bear cubs during our expedition. The first was with a mother and two very young cubs at the base of one of the main bird cliffs in Hinlopen Strait and the second was in Kongsfjord near the site of an Arctic Fox den. Both encounters were very emotional moments for all aboard. Small cubs (born this year) are not only extremely cute (and photogenic), but are walking emotional reminders of how fragile life is in the Arctic. Seeing young cubs gives me hope that the Polar bear may yet have a viable future.

We also had a wonderful photographic encounter with Walrus from our zodiacs during our expedition. We were able to drift on gentle currents in calm seas in one of the fjord systems whilst a large group of Walrus sated their curiosity at our presence. Walrus are best photographed in the water in my experience and we were extremely fortunate to get such a wonderful and close experience. This was only the second time in my many expeditions to the Arctic I have had such a great encounter with Walrus in the water. 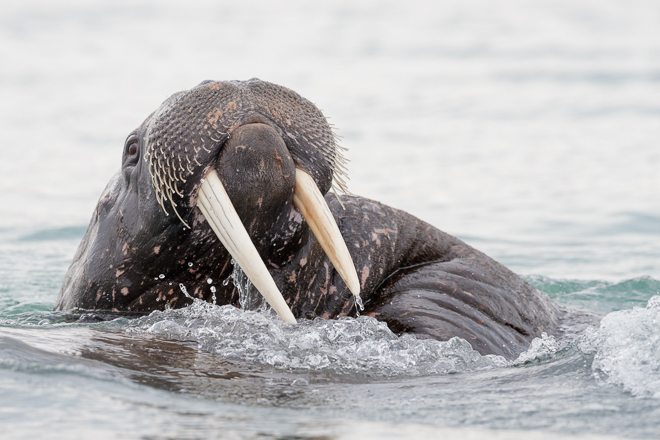 During our time in Svalbard we also explored the Kongsfjord system where we encountered Arctic Fox, Bearded Seals and a great many of the Arctic bird species found in this part of Svalbard including the Pomarine jaeger (Stercorarius pomarinus), pomarine skua. This was only the second time I have had such a great opportunity to photograph this bird in the Arctic. In terms of bird life we also had fantastic Ivory gulls up in the ice as well as a great many others during the expedition including Puffins, Glaucous Gulls, Eider ducks, Snow Buntings, Guillemots, Purple Sandpipers, Fulmars and more. We also spent many hours cruising the ice filled bays and glacier fronts which offer limitless opportunities for landscape photography – both the grand landscape and the intimate scene. Watching ice carvings from the many glacier fronts from the safety of our zodiac is a real experience not to be missed.

Lastly, we rounded out our expedition with several hours of photography of some extremely playful Arctic Fox cubs on our return to Longyearbyen. This location also provided a much welcomed opportunity to photograph Reindeer against some spectacular landscape backdrops. All up, our 2018 expedition to Svalbard was a fantastic success with outstanding opportunities for wildlife and landscape photography.

I have been travelling to Svalbard several times a year since 2013 and it remains one of the most incredible and photogenic locations in the Arctic I have been fortunate to visit and photograph. I will be returning to Svalbard next summer in July for my High Arctic expedition. If you are interested in joining there are already only a few places remaining before the expedition will be sold out. You can register your interest or make a booking by dropping me an email. If you want to get an idea of what this expedition is like be sure to read the testimonial from Rob Young from this years expedition and check out the Kingdom of the Ice Bear video below.