The final photograph of the month for 2015 is part of the Arctic Fox project I have been working on for the last few years in a remote part of Iceland during the winter months. This male and female fox were huddled together near my snow blind for about an hour during some pretty serious weather last winter. The wind was howling and the snow was flying – the ideal conditions I look for when photographing Arctic and Antarctic wildlife. Photographing in these conditions is challenging, but the results are incredibly rewarding.

The photograph of the month for November 2015 was taken in March this year in Svalbard in winter of a Polar Bear, back lit by the setting Arctic sun and standing guard over a recent seal kill. Its breath steaming in the winter sunlight this remarkable situation was the absolute highlight of this scouting trip to the Arctic in Winter. This photograph recently won a coveted Silver with Distinction at the 2015 Australian Professional Photography Awards (APPA) here in Melbourne.

The photograph of the month for October 2015 was taken in August this year on my Kingdom of the Ice Bear Expedition (full trip report coming soon – along with a new ‘experience’ video) and was shot in the very early hours of the morning under the Midnight Sun at roughly 81º North. The high Arctic is an incredible place for landscape photography and in this instance we were very fortunate to have some fantastic cloud in combination with some wonderful sea ice. The small hours of the morning often offer the best light in the Arctic summer and this evening was no exception. This was one of the first photographs I made in the Arctic with Canon’s new 5DSR 50 mega pixel camera and I have to say the resulting resolution and detail offered by such a high resolution sensor is nothing short of astounding. 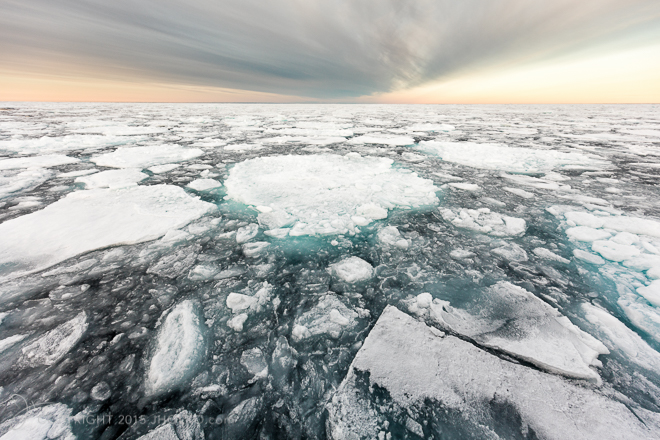 The photograph of the month for September 2015 was taken on the very last day of my New Zealand South Island workshop this year and was shot during absolutely torrential rain just a few minutes after sunrise. This location in the South Island is a virtual unknown to photographers and one of my favourite locations to spring on participants during a workshop. This was the first time I had been there in such heavy rain and as it turned out the rain added a wonderful moody element to the photograph. I used a long exposure so as not to freeze the rain drops and to let the whole image take on a very moody ethereal nature.

In honour of the upcoming Highlands expedition, the photograph of the month for August 2015 is of a Super Moon rising over the Highlands in Landmannalaugar in Iceland under the Midnight Sun. Photographed last year, during a two week camping expedition with my good friend Antony we were fortunate to experience some truly superb light late one evening just as the super moon was rising above the mountains in the distance. We had hiked up to the summit of one of the taller peaks and spent a couple of hours photographing the wonderful mountains in extraordinary light. 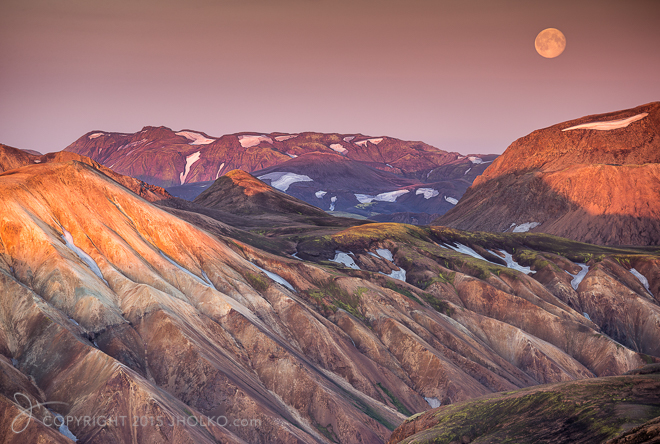 My photograph of the month for July 2015 was taken during an expedition to photograph Polar Bears this winter on the frozen Templefjord in Svalbard. The Polar Bear was both playing and hunting around this large piece of blue ice in front of the glacier as I photographed her from snow mobile. She frequently tested the ice by leaping onto it and putting full her body weight on a concentrated area to try and break through and reach the seals beneath the ice.

My photograph of the month for June 2015 is of one of the Moeraki boulders on the east coast of the South Island of New Zealand. The Moeraki boulders have become an iconic location for photographers visiting New Zealand and the area is now one of the most popular locations for landscape photography in the South Island. These oft photographed spherical boulders present a real challenge if you want to try and create something different and unique. This photograph was taken during my 2015 Masterclass workshop (trip report coming soon) and was the result of focusing my efforts on a single boulder that was surrounded by a pool of water at low tide. 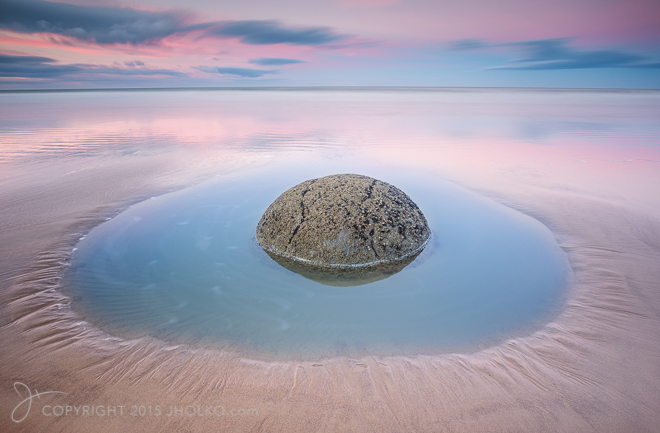 My photograph of the month for May 2015 follows on the Polar Bear theme from last month. In fact, this was the same Polar Bear as the previous photograph; although this image was taken a couple of days earlier and in a different location. The bear surrounded by winter ice with its paw raised, mid step, walking straight toward the camera is a powerful iconic image of the world’s largest land predator. My heart was racing when I took this image and it rates as one of the most exciting experiences I have had in the field photographing wildlife. The bear was in hunting mode, prowling the ice in search of food. It would stop occasionally and test the strength of the ice, smell at a particular place and then move on. It watched me intently as I crouched behind my snowmobile making images until it was time to move on before the bear got to close.

The photograph of the month for April 2015 was taken during my recent expedition to photograph Polar Bears in Svalbard in the Arctic this winter. If you have been following my blog (or read the story in the news) you will know that this bear was unfortunately shot dead only a few days after this photograph was taken (You can read my thoughts on this tragedy that could have so easily been avoided). This particular photograph is a very emotional image for me because of the tragic set of circumstances that led up to the death of this magnificent animal and the time I had spent photographing it only days earlier. I watched and photographed this magnificent Polar Bear play around this piece of blue ice against the backdrop of the glacier in Tempelfjorden in Svalbard for well over an hour. It was one of the most playful Polar Bears I have ever encountered and watching it climb over and play around this piece of blue ice was a very unique and special experience.

The photograph of the month for March 2015 was shot during one of the last zodiac cruises on my 2013 Antarctica expedition. We were fortunate to come across an iceberg of truly monumental size near the entrance to Antarctic Sound. Whilst I have been fortunate to see and photograph icebergs even larger than this (and the biggest icebergs are measured in kilometres) this particular iceberg also had an incredible chasm, wonderful form and shape and beautifully chiselled features. Our expedition ship ‘Polar Pioneer’ pictured here is seventy two metres long and a full six decks high at the fly bridge.  This was actually one giant iceberg joined underneath the water.  Our ship could have easily fit through the chasm however such a venture would have been exceedingly dangerous. I admit though my mind was racing with the thought of a blast through this chasm in our zodiac!

It feels appropriate that an Arctic fox photograph is the February photograph of the month given I will soon be headed back to Winter in Iceland to photograph one of my favourite Polar mammals – Perhaps Nature’s greatest survivor. This photograph, taken in the extreme northeast of Iceland last year during freezing sub zero temperatures was taken during a seven day expedition to the Hornstrandir Nature Reserve. This is an area of Iceland very rarely visited during the winter months. It is extremely remote, and only accessible via chartered boat ride (approximately fours north of Isafjord). It is logistically difficult to get there and special permission is required from the park ranger to undertake a winter expedition into the area. On top of that there is no infrastructure once you arrive and everything from food to satellite communication and survival gear must be carried in for the duration of the expedition. I love this photograph for both the pose of the fox, but also for the dusting of snow clinging to its coat and tail. There was a low fog when I took this image and in print you can actually see the exhale of breath from the fox.

My first photograph of the month for 2015 is an image I titled ‘Maelstrom’ of a large tubular iceberg on the edge of the Weddell sea in Antarctica. It was photographed from the fly bridge of the expedition ship in howling katabatibc winds – probably the strongest winds I have experienced to date in Antarctica (just standing on the deck without holding on was all but impossible). The winds (in excess of 50 knots I was told by the Captain) were whipping the fresh snow off the top of the iceberg like a vapour trail. There are a combination of factors in this photograph that really work for me, but its the drama that sets it alight and really makes it sing. I have been fortunate to photograph a great many icebergs over the last few years and it is the images that were shot in dramatic weather that really stand out for me.  They are far more evocative than images of icebergs under blue skies or in fine weather.