It has been just over a week since I returned from two months photography in Iceland, Svalbard and Greenland and I am still very much catching up on sleep and recovering from jet lag. After two months in the Arctic with no real darkness under the midnight sun it is taking me some time to readjust my body clock to regular working hours. The high Arctic is an incredible place in summer for photography, but the continual sunlight and lack of darkness takes its toll in terms of trying to sleep between zodiac and shore landings.

If you a regular reader of my blog you will know that I took the Gura Gear Monarch Bataflae 32L with me to Iceland, Svalbard and Greenland as my primary camera bag for this two month period. At its most northerly position the Monarch and I reached approximately 81º North in the pack ice above Svalbard where we had some incredible encounters and experiences with Polar Bears hunting on the pack ice. Photographing Polar Bears hunting seals on the pack ice rates as one of the most incredible photographic experiences I have been fortunate to have and I am looking forward to sharing many of the photographs I made during my time in Svalbard over the coming weeks and months. I will also have more to say in future posts about the incredible landscape to be found in Greenland – A country of truly extraordinary geology. 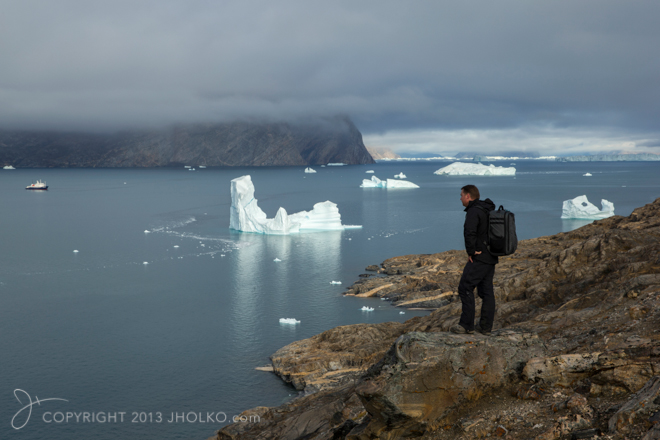 During the two months I was in Iceland, Svalbard and Greenland I made more than 18,000 photographs and at present am still sorting, key wording and editing them down to a more manageable number. I have done a quick pass through the photographs and  have uploaded a few of my initial favourites to my primary portfolio website at www.jholko.com A higher resolution version of this photograph of a large female Polar Bear staring into her reflection at the edge of the pack ice can be seen on my website in the Svalbard Portfolio.

The Monarch is now winging its way back to Gura Gear headquarters in the United States in preparation for its next journey and adventure having now travelled to Kenya in Africa with Andy Biggs and Iceland, Svalbard and Greenland with myself.  Be sure to keep an eye on the Gura Gear website for future updates on its whereabouts as it makes its way around the globe with other pro photographers to some of the world’s most amazing photographic locations.