In July and August 2015 I lead two photographic expeditions to the edge of the permanent pack ice north of Svalbard to photograph Polar Bears living and hunting in their natural environment. During the expeditions we also photographed incredible arctic landscapes as well as other wildlife of the Arctic region including Walrus, Arctic Fox, Whales, Seals and a plethora of sea birds including the rare and angelic Ivory Gull and the even rarer Sabine Gull (the first time I have seen and photographed this gull). Both of these expeditions were for small groups of just twelve passionate photographers and utilised a small ice hardened ship that enabled us to sail north directly into the pack ice in search of the king of the Arctic.

Importantly, our ship had very low decks that were very close the waterline which enabled us to make photographs at eye level for more intimate images. The choice of ship for expeditions such as these is critical to the ability to put yourself in the best possible place to make powerful and emotive photographs. Large ships that are unable to penetrate the ice and with high decks  where you have to compete for space with other passengers are far from ideal and unsuited to photography expeditions. 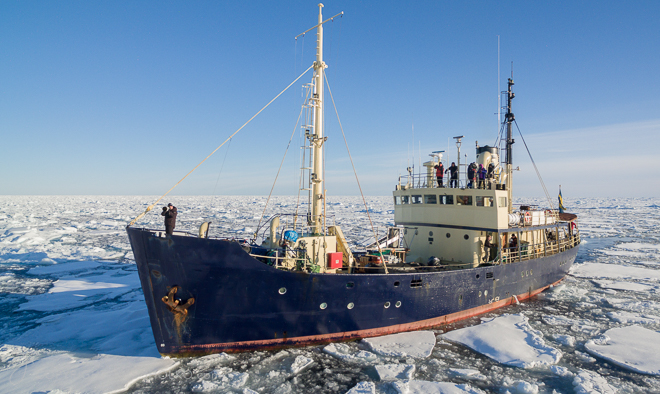 During both expeditions we were fortunate to see and photograph Polar Bears on the pack ice including a number of Bears on recent seal kills. Seeing a Polar Bear on a seal kill is a very rare event and as luck would have it were able to photograph the kills and all aboard were able to capture some really fantastic photographs.

Although both expeditions had the same objectives, we undertook very different routes on both trips to achieve them. On the first expedition (July 25th – August 4th 2015) we sailed south to the bottom of Spitsbergen before rounding the cape and heading north. Our decision to head south was an educated gamble based on the prevailing weather and as it turned out it really payed off with a wonderful mother and cub polar Bear encounter on the sea ice in our first twenty four hours. We also scored the added bonus of circumnavigating Spitsbergen (something I had not done before).

We continued our northerly travels encountering a mix of weather and fog before we arrived into better conditions in the Hinlopen strait. In this area we explored and photographed the spectacular 200 mile+ long glacier face Bråsvellbreen and the plunging bird cliffs at Kapp Fanshawe. The sights and sounds of thousands of nesting birds against such a precipitous cliff is an awe inspiring sight. I have been fortunate to visit this area a number of times now and it never ceases to impress. Bobbing up and down in a zodiac beneath these rock spires, surrounded by thousands of Arctic birds is a very special experience.

We continued to head north spending the next few days exploring the pack ice and photographing Polar Bears as they jumped from ice flow to ice flow. The Arctic pack ice is a vast area and just finding Polar Bears in this maze of ice can be quite the challenge. We spent many hours scouring the ice with binoculars to find these masters of camouflage. On this expedition our total bear count on the pack ice was eight – with almost all of these being close encounters where we were able to get some really wonderful photographs.

When it was time to head south again we made several stops in the spectacular Kongsfjorden; where we photographed Arctic Fox cubs and cruised the glacier fronts photographing icebergs, seals and landscapes. We also landed in Poole Pynten where had a wonderful session photographing Walrus in fantastic light. During the expedition we were also fortunate to see and photograph a rare Blue whale (unfortunately I did not get a good photograph). Blue whales are quite tricky to photograph as they rarely reveal to much of their body above the waterline. Nevertheless the experience of seeing this massive mammal is an experience that stays with you forever.

The second expedition (August 20th – August 30th) saw us set sail from Longyearbyen and head directly north for the pack ice. We made a number of small detours and stops along the way (including a glacier front cruise at Duvefjorden where we encountered three polar bears on some summer melt pack ice) as we dodged some inclement weather before arriving directly on a fresh seal kill with two Polar Bears on the edge of the sea ice – perfect. This was a miraculous find as we had a quickly closing weather window that required us to retreat from the sea ice until the seas calmed and we could return.

We sought shelter for the evening in the lee of the Seven Islands before resuming our search for Polar Bears on the pack ice. At our furthest northerly most position we were just shy of 82º North – less than 500 Nautical Miles from the North Pole. We cruised the edge of the pack ice for several days photographing the dramatic landscape and had numerous encounters with Polar Bears in fabulous weather.

Untitled Film Works accompanied Daniel Bergmann and I on the second of the two expeditions and filmed the expedition and we hope to soon be releasing a short film of our experiences in the Arctic. Look for this video soon if you have ever wondered what it is like to travel on an small dedicated expedition to the Arctic.

During both expeditions we took advantage of great light at every opportunity and often worked at night when the light was soft and ethereal. One of the most fantastic things about photography in the Arctic is the 24 hours of daylight and the extensive opportunities this provides for image making at any time of the day or night.

Our total Polar Bear count for the first expedition was eight including three bears on kills. Our count on the second expedition was fourteen including another two kills. This was a fabulous result that netted some amazing photographs from all aboard.

This year saw a dramatic increase in sea ice in the Svalbard region that made finding Polar bears very difficult due to the nature of the ice (lots of ice rubble and very little flat pack ice). It is worth noting that this increase in sea ice is not contrary to global warming evidence (as has been reported elsewhere). This phenomena was merely the result of the polar ice cap (which moves) shifting more toward the Svalbard side of the globe. Overall, the massive reduction in sea ice continues and 2015 saw the Arctic ice pack shrink to record lows. Just as an aside I was extremely pleased to hear in late September this year that Shell has now abandoned its oil and gas exploration drilling in the Arctic for the foreseeable future.

Both of these expeditions were remarkable trips that provided some truly fabulous photographic opportunities. The high Arctic remains one of the most spectacular locations I have ever visited and I look forward to returning again next year when I will lead another expedition to the pack ice north of Svalbard (and again in 2017) Polar Bears of Svalbard. The expeditions will depart on the 25th of July from Longyearbyen and are dedicated to the photography of Polar Bears living and hunting on the sea ice. If you would like more information about either of these expeditions please drop me an email at info@jholko.com