The photograph of the month for November 2016 is of a teenage polar bear on the frozen Templefjord north of Svalbard. The image was taken during a winter snow mobile scouting trip in March last year with a Canon EOS 1DX camera and Canon 600mm F4L IS MKII Lens. What I really love about this photograph is the simplicity and balance in the image. The bear is walking into the frame with it’s paw nicely curled mid stride (we can see all four legs clearly) and is nicely balanced with the exposed ice covered rock on the left. There is also some really nice blowing snow around the feet of the bear that give great context of how cold it was when I made this photograph (around -20 Celsius). 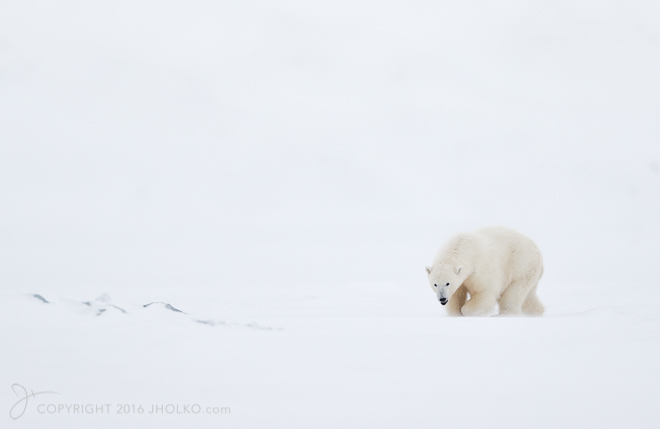 If you are interested in photographing Polar Bears on sea ice under the midnight sun there are now only a couple of places remaining before my expedition next July will be sold out.  You can register your interest by dropping me an email. If you want to get an idea of what these expeditions are like be sure to read the Trip Report from this years expedition and check out the Kingdom of the Ice Bear Video below.

A small teaser for those of you who read to the bottom – I will be filming a new short movie with Untitled Film Works this coming Winter in Svalbard on what its like to travel to the top of the world and photograph Polar Bears on the frozen sea ice during the frigid winter months. Look for this to be released mid 2017.