My winter workshop to the Lofoten Islands next February is now sold out – thank you to all those who are joining Martyn and I on this workshop – we are really looking forward to it! The landscapes of Lofoten are really quite something to behold and with a dusting of fresh snow and arctic winter light the entire area is akin to a fairy tail location and subsequently the photographic opportunities can be truly superb. This will be second workshop I am leading to Lofoten (Read the 2016 Workshop Trip Report) and I am really looking forward to returning next year to this magical group of Islands.

In some very exciting news I learned a few days ago that my Limited Edition book Melrakki (now sold out as the Limited Edition) has just won best in category for digital printing as well as the the prestigious Benny Award at the Premiere Print Awards held by the Printing Industry of America. The Premier Print award goes to those print companies who demonstrate a unique ability to create visual masterpieces. The entry represents the unique partnership between designer, and printer, need and creativity, technology and craft. Of the more than 2,200 entries received Melrakki was chosen as exemplifying the highest standards in the printing industry! This new award follows straight on from the news that Melrakki also won Gold at the National Australian Print Awards a few weeks ago. It has been a great couple of weeks!

The entry edition for the both the Premiere Print Awards and the Australian Print Awards was produced by Nulab in Melbourne after extensive consultation on specialised custom finishes to ensure an absolute no compromise deluxe limited edition with the highest possible quality and finish. The final edition includes a hand bevelled glass cover, with leather spine with deluxe lay-flat album pages. Each page in the album represents the pinnacle of digital printing and matches the subtleties and nuances of the original fine-art inkjet prints.

I am absolutely thrilled with these results and I want to thank Michael Warshall and his amazing team at Nulab again for all of their efforts in the production of this super deluxe limited edition. Originally produced as a single one off edition just for both these awards we have decided to make this super deluxe limited edition available for sale in the limited quantity of just five (5) copies (the first edition is already sold). The remaining four will be made available for sale on my website over the coming weeks. Each of these four editions will be hand signed, numbered and include a 20″ x 30″ fine art print from the book printed on Moab Somerset Museum Rag. Each edition comes in a presentation box. For existing owners of the Limited Edition there will be an upgrade offer to upgrade your copy to this new edition if you so desire. The remaining four editions will be sold on a first come, first served basis.

I was very pleased to receive notification a few days ago whilst I was travelling back to Australia that I have had several of my photographs selected as a finalist images in Natures Best Photography 2017 competition. This is the seventh year in a row I have had my photography in the semi-finals and am honoured to have had my photographs selected again (last year I was also highly commended in the Polar Passion category). I can’t share which photographs have been selected at this point in the judging, but will post the images up as soon as the final judging is complete. In the meantime please enjoy this recent photograph from my Svalbard in Winter snow mobile expedition.

I will also have some more news in the next few days about the super deluxe limited edition Melrakki Book that will be limited to just five copies.

It is timely to have a landscape photograph from Antarctica as my photograph of the month for June both because I am currently reviewing my entire Antarctic Portfolio for a new large format fine art book to be released late next year and because I am starting to think about what equipment and lenses I am planning to take with me to Antarctica this November (this year I will also take with me an underwater housing which somewhat complicates the packing arrangements). This particular photograph was made last year on my Antarctica / South Georgia expedition from zodiac during overcast conditions and heavy snowfall on what was I felt our best day for photography. I used the Canon 11-24mm wide angle lens with the Canon EOS 1DX MKII camera held down low over the side of the zodiac just above the water line. I absolutely love the heavy brash ice in the foreground, the deep overcast sky and the beautiful shape and texture of the iceberg in the distance. I also prefer this sort of limited colour palette as I find it representative of the very best Antarctica has to offer (blue skies make nothing more than postcards). For me, these are the most evocative images of Antarctica that truly speak to me about the sublime beauty and ethereal tranquility of this stunning and most precious white continent. 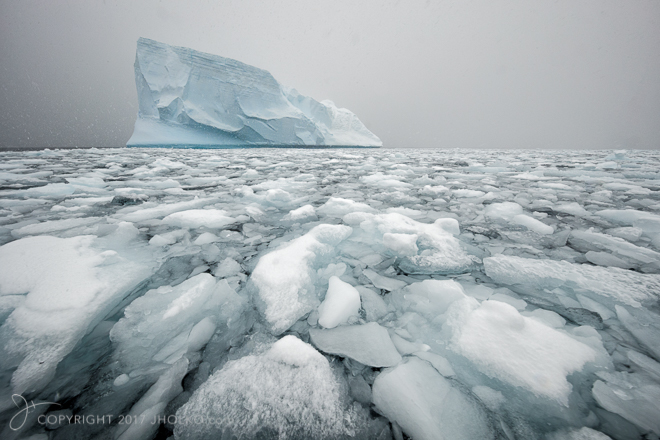 Melrakki Limited Edition is now Sold Out. My sincere thanks to all of you who purchased a copy of this book that documented my time photographing Arctic Fox across three years in winter in the north of Iceland. As this book was limited edition it will no longer be available in this hardcover form. However, calendars for the coming 2018 year of the Melrakki project are now available  for sale on my website and there may be a future open edition soft cover book of the project.