In October of 2018 this year I lead my semi-annual landscape and wildlife workshop to Namibia in Africa. This was my fourth workshop to the desert of Namibia and the first time I had ventured north into the wildlife rich region of Etosha. 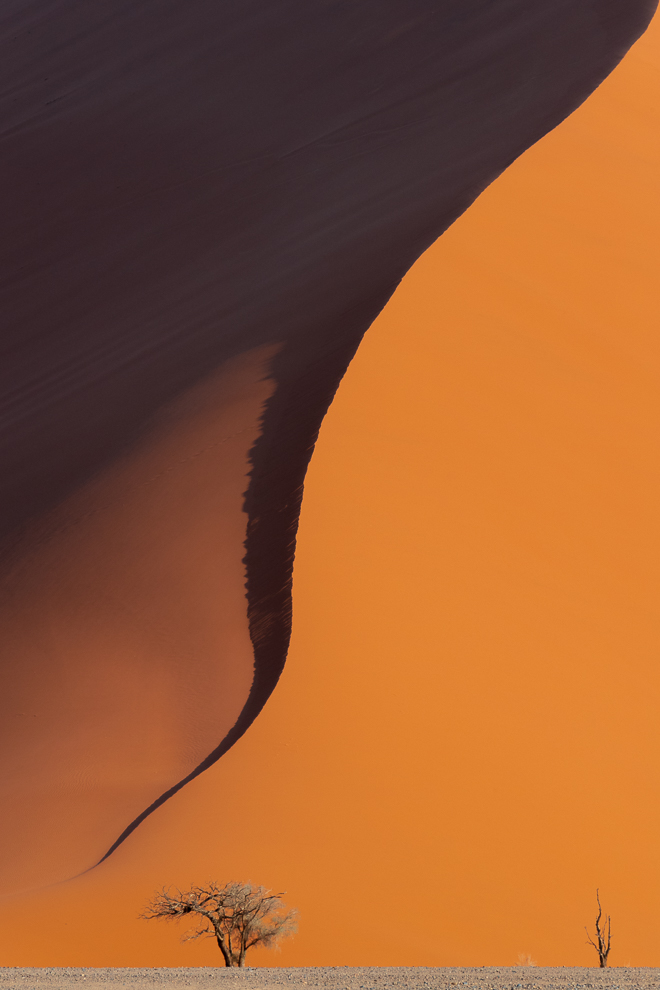 It was also the first time I have scheduled this workshop for October (instead of April / May when there is often more cloud). October was a deliberate choice for this safari as it is the end of the dry season in Etosha. Water is at its most scarce and the wildlife is thus forced to congregate around the last few remaining watering holes whilst they wait for the rains and the start of the wet season. It can be very hot this time year but I personally found it no worse than April / May and as it turned out we had the added bonus of clouds during our morning sessions at Deadvlei. 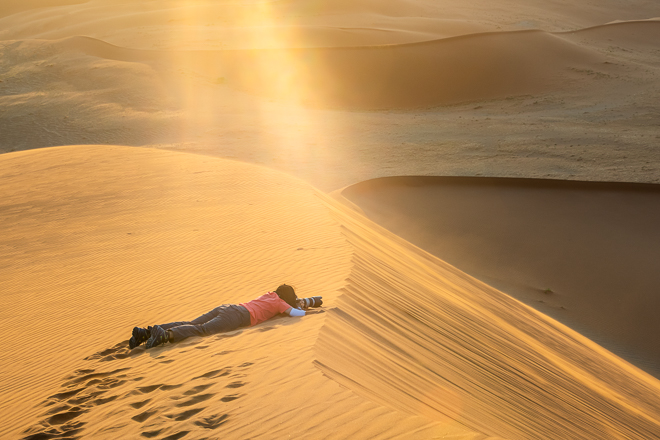 We began our workshop in the capital city of Windhoek with a short one hour flight down to the coastal town of Luderitz where we spent the next three days photographing the Ghost town of Kolmonskop and the abandoned diamond mine at Elizabeth Bay. For 2018 I made the decision to fly the group from Windhoek down to Luderitz to save two days driving in the heat of the desert. This gave us more time for photography during our trip and saved many hours on the hot and dusty roads. The short one hour flight also gave us some absolutely spectacular aerial views of the landscape. 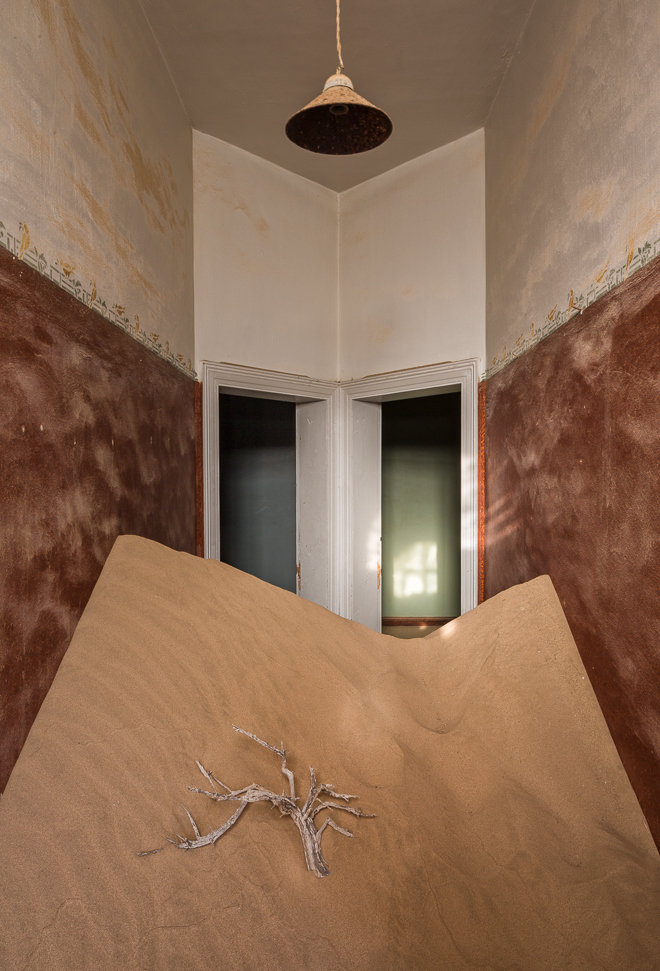 Kolmonskop remains one of the most fantastic places I have yet found to photograph abandoned buildings. Although this location is heavily photographed and frequently visited we had special permission to enter before sunrise and stay late until after sunset, meaning we had the entire location to ourselves for each and every visit. With its shifting sands Kolmonkop is an ever changing location that is never the same between visits. Despite having visited this location no less than a dozen times now I am still finding new and interesting compositions amongst the sand filled ruins and we spent many hours combing the buildings in search of interesting photographs. 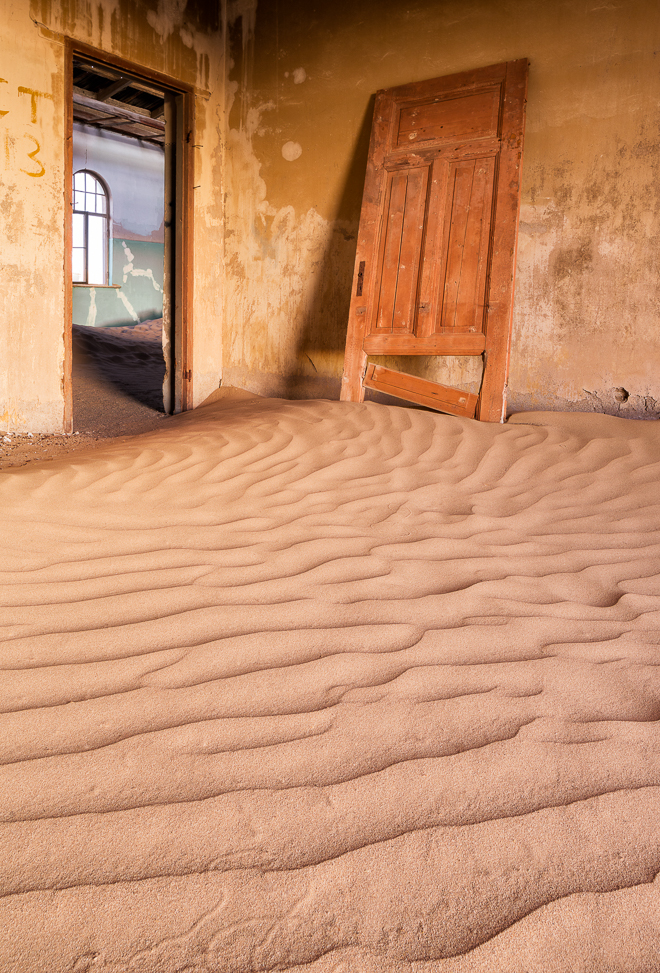 One of the real highlights of this trip for me was a first time visit to Elizabeth Bay (located near the coast not far from Kolmonskop). I have been trying to get permits and access into Elizabeth Bay for four years now and it was absolutely fantastic to finally be granted access to this remarkable location. I had first heard about Elizabeth Bay from Michael Reichmann more than a decade ago now. Two years ago I was finally able to get permits to enter, which were subsequently cancelled and withdrawn just two weeks before we were due to enter (no explanation given). This time luck was on our side and our permits held up and we were able to spend half a day exploring the many ruins of this now abandoned mine. 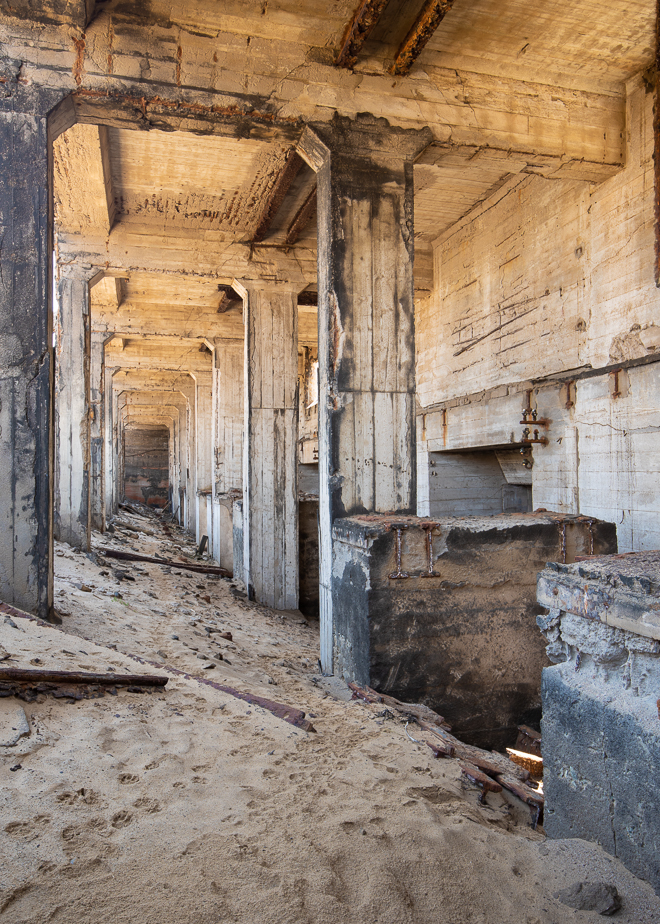 Elizabeth Bay is one of the most remarkable locations I have ever visited for rusted relics and abandoned buildings. Unlike Kolmonskop, Elizabeth Bay is far more industrial in nature. The entire site is littered with rusted and abandoned mining equipment that would keep any ‘rust-hound’ photographer happy for days on end. The size and scale of the abandoned mining operation needs to be seen to be truly appreciated. We spent the better part of half a day in this area but could have easily made repeat visits.

From Luderitz we drove up to the Namib desert where we visited the Sossusvlei region that included several trips into Deadvlei and the spectacular dune corridor. During our time in this area we stayed inside the actual park so that we could access both Deadvlei and the dune corridor at first light. Both Sossusvlei and Deadvlei are extremely popular sites and the benefit of being able to be first on site is not to be underestimated. We were fortunate to have Deadvlei to ourselves on several occasions at first light. 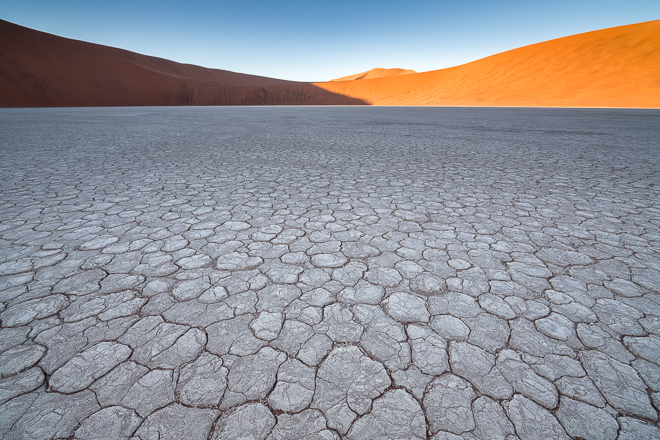 Whilst in Sossusvlei we also took the opportunity for multiple helicopter flights (doors removed) over the dunes at both sunrise and sunset. Helicopter flights over the dune sea are an absolute highlight with limitless compositions to be found in the gigantic dune sea. We were also fortunate to encounter some fog as we approached the coastline which added even more interest to an already superb landscape. During several flights we also photographed Oryx in the dunes. 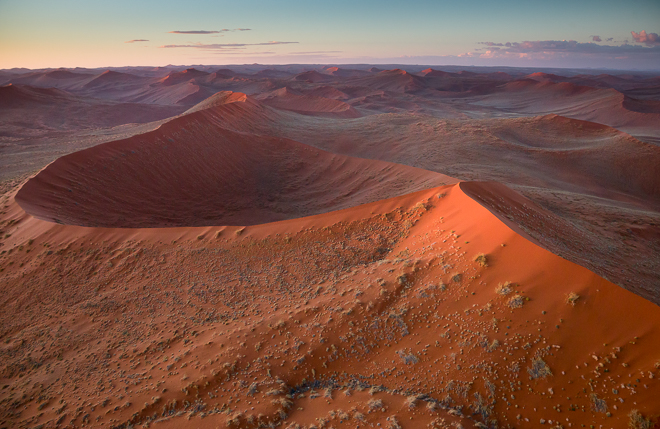 From Sossusvlei we headed north to Etosha with an overnight stop at the scenic Erongo wilderness lodge. Erongo is a page out of the Jurassic era with its giant granite boulders and its mountainous surroundings. There is a limitless amount of landscape potential to be found in this area and it can also be a fantastic place for star trails and astro photography.

During our time in Etosha we stayed on both the Eastern and Western ends of the park in order to give us maximum variety across this huge area. Our accomodations were private high end lodges equiped with fantastic views, air conditioning and much more. We had both morning and afternoon game drives with great photographic sightings that included both White and Black Rhino, Lions (including lions on a kill), Lion cubs, Hyena, Elephants, Giraffe, Leopard (although this was a nice sighting it was not a photographic opportunity as the Leopard was heavily obscured by scrub), Zebra, Springbok, Oryx and much more. Of course there were also many fantastic birds of prey including Marshall Eagles, Tawny Eagles, Brown Snake Eagles, Pale-chanting Gosshawk and many more on top of all the other bird species. The personal highlight for me was the Leopard sighting; even though I did not get a photograph this time. 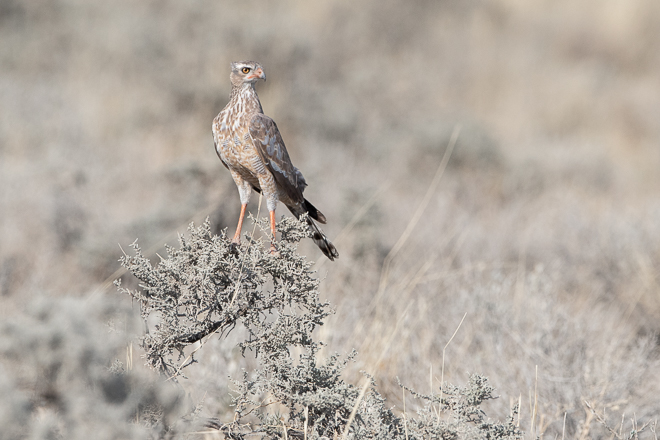 This was my first visit to Etosha and I found the white earth / sand of this region to be absolutely superb for wildlife photography (Etosha literally means ‘Great White Place’). The combination of dry white earth, dust and a parched landscape is highly complimentary to the wildlife and I personally found it really helped in the creation of evocative imagery. The irony of the similarities to a snow covered landscape was not lost on me. Etosha itself is one of Southern Africa’s finest and most important game reserves. The park itself is dominated by a massive white mineral pan (hence its name) that provides a fantastic backdrop for wildlife imagery. 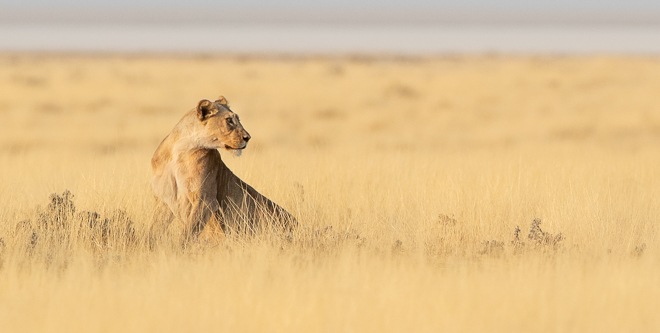 One of the frustrations with all safari wildlife photography is the inability to get out of the vehicle to best position yourself and to get as low as possible. Etosha (and indeed all game parks in this region) is no different in this regard; however, I found the best solution for this was to shoot with a long lens. The long lens minimises the ‘top-down’ look and can be used very effectively to give the illusion that the photograph was taken from much lower down than it actually was. As a result I shot almost exclusively with the Canon 400mm f2.8 L IS MKII with and without a 1.4 extender when I was in the safari vehicle. This approach worked well for me and it was a rare occasion when I felt the need to go wider. In addition I had organised for a second safari vehicle so that we had heaps of room for each person and their equipment. The second vehicle meant it was also possible to shoot from both sides of the 4-wheel drive without having to turn the car for each side.  If you are planning any sort of safari to Africa I strongly recommend you make sure your chosen company has made similar arrangements. There would be nothing more frustrating than being on the wrong side of the vehicle during a fantastic sighting and photographic opportunity. Note: All GPS metadata for the Rhino photograph below with full horn has been stripped. This very rare white Rhino was photographed in the wild in Namibia – but not at a location I have mentioned. 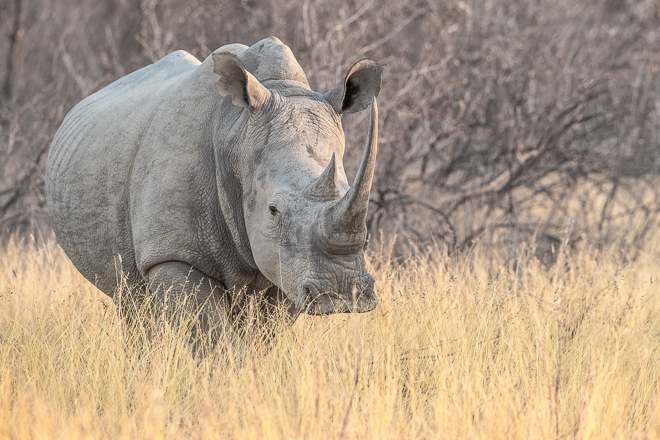 Once finished in Etosha we wrapped up our return journey to the capital Windhoek and concluded with a farewell dinner in one of Windhoeks best restaurants.

This workshop was in many ways a ‘best-of’ Namibia and from what I have seen of the photographs taken by all who participated there have been some absolute gems. We had some wonderful light and moments throughout the trip that will make this one I will remember for a very long time. 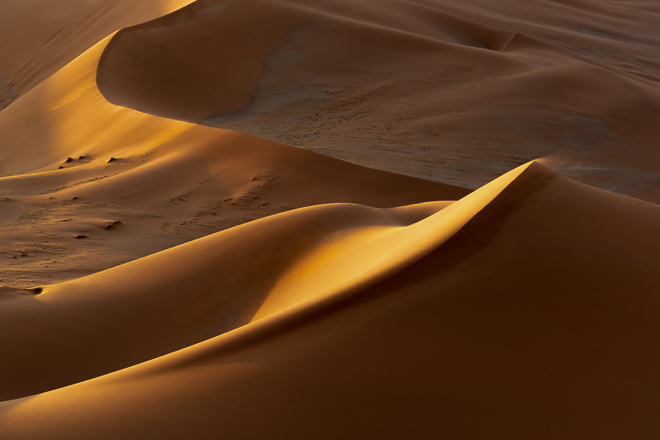 To those of you who have already asked about a future Namibia trip: I have tentative plans at this stage to possibly return in October of 2020. I hope to have more details early next year once I have a clearer picture of my schedule for 2020. Of course, if you want to get the drop on it and be amongst the first to be notified please just drop me an email.