Skip to content
May 20, 2014 Posted in Antarctica, News and Updates, Travel Photography

In a very concerning report just published by the BBC, Esa’s Cryosat mission reports that Antarctica recent ice losses have doubled. Antarctica is now losing about 160 billion tonnes (the’s billion with B) of ice a year to the ocean – twice as much as when the continent was last surveyed. This is an incredible increase and should be a huge wake up call to governments around the world.  The full report is well worth the five minutes it will take you to read.

“The new assessment comes from Europe’s Cryosat spacecraft, which has a radar instrument specifically designed to measure the shape of the ice sheet. The melt loss from the White Continent is sufficient to push up global sea levels by around 0.43mm per year. Scientists report the data in the journal Geophysical Research Letters. The new study incorporates three years of measurements from 2010 to 2013, and updates a synthesis of observations made by other satellites over the period 2005 to 2010. Cryosat has been using its altimeter to trace changes in the height of the ice sheet – as it gains mass through snowfall, and loses mass through melting.” 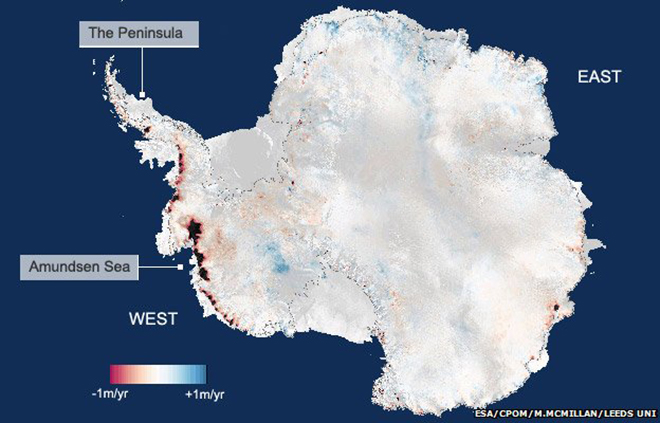