I received an interesting message and question a couple of days ago via social media that I think is worth sharing here on my blog. Scott asks:

Hey Josh. As a hobbyist photog who doesn’t really participate in social media with my images nor enter comps, but shoots purely for relaxation and personal enjoyment and who struggles with creativity, how could you suggest I look to make landscape images with more emotion and mystery? I don’t really shoot the common haunts as I may as well just get a perfectly fine image off the web.

Its a good question and one I suspect Scott is not grappling with alone. Before I address his question though I think its worth taking a moment to look at what spawned the question.

A couple of days ago a blog post appeared on social media that got a number of photographers in a bit of a flap (the post is still doing the rounds on Facebook). Titled “Will the Real Landscape Photography Please Stand Up“, the essence of the post was that the internet is now awash with technically perfect landscape photographs that are soulless, lacing individuality and devoid of emotive content (You can read the original post HERE). As an aside, I am actually in complete agreement with the author and shared my thoughts about it on social media yesterday. I went as far to say that I felt the author had not gone far enough and that (to quote myself) “We live an age where prolificacy is rewarded over quality (at least on social media). Never before has the idea of less being more been so poignant in my mind.”

I have been feeling more strongly of late about these issues for all of those reasons already listed in the aforementioned blog post. In semi-frustration I kicked off my social media year with this comment on Facebook “2015: I want to see more mystery in photographs. Deeper relationships and more thoughtful and considered story telling. What is not shown matters more than what we show in a photograph. Give me a great story, mystery, drama and leave me longing for more…..”

What I didn’t do though was go on to talk about how to do that, which brings us to Scott’s question.

Photography is at its core a still medium that we use to tell stories. The problem with much of the photography that is referenced in the blog post ‘Will the Real Landscape Photography Please stand Up” is that there is no story being told by the photograph. Or rather, the story is one of technical perfection and a pretty picture.

Photography is the art of observation. It’s about finding something interesting in an ordinary place or thing. It frequently has little to do with the things you see and everything to do with the way you see them. And that brings us to the art of seeing. An art that is being lost in a sea of technical perfection. Sure it takes technical skill to set up a camera and tripod in a beautiful location with great light and make a pretty picture. It takes artistic skill however to create an evocative photograph with emotion and mystery.

Creating images with mystery and emotion starts with seeing with better eyes. Weather, light and composition all play a vital role in the process but the real emotion is going to come from the story you are trying to tell with your photograph. I wrote yesterday in my book review of La Nuit du Cerf (Night of the Deer) about how photography is a subtractive process and what we exclude is often more important than what we include. Photographs are often successfully emotive because of what the photographer chose to exclude, rather than what he or she has included – there are countless well known examples to illustrate this point. Giving a sense of something is often far stronger than showing the whole thing. Leave something to the imagination of the viewer in your photographic compositions and you will find your images become stronger, more emotive and mysterious. The story does not have to be completed in a wide angle frame that encompass absolutely everything. It is often well worth letting the viewer fill in the blanks in their minds eye. After all, no photograph can compete with a stimulated imagination. The more you can fire the imagination of the viewer the more successfully emotive your photograph will become.

I cannot recall who it was who was first quoted as saying “Don’t photograph what it is. Photograph what else it is” but this statement is great advice we should all keep in mind when we are out taking photographs.

I have judged many photographic competitions over the last few years and without doubt those photographs that are most successful are the ones that tug on my emotional strings. These photographs create a connection with the viewer that is deeper and more meaningful than the feeling a pretty picture might impart.

Learning to see with better eyes takes time but is something we can train ourselves to do. Looking at photography books or attending galleries (not just photographic galleries) and exhibitions are two good ways to improve your vision. Look a how other photographers whom you admire interpreted a scene or subject and analyse what it is that creates the connection for you to the work. Think about what it is you are trying to say with your photography before you click the shutter. I frequently ask workshop participants what their photograph is about when they ask for feedback on their images –  I often receive a blank stare in return. If the photographer doesn’t know what the image is about how is the viewer supposed to know? It might be a photograph of a Penguin and that might well be the answer, but the real answer should be about what the photographer is trying to say about the subject.

Lets look at this photograph of mine of Gentoo Penguins on the sea ice near the entrance to the Lemaire Channel in Antarctica as an example. This photograph is about “being left behind”. It tells the story of the Gentoo Penguins in their environment. We know (even though they are small in the frame) that these are penguins because of their distinctive shape. We know they are in Antarctica because of the giant icebergs in the back ground. We know they are in their natural environment as they are walking across the sea ice. Yet, it is that one lone penguin that is lagging behind that creates the emotion in the photograph. When this photograph was judged at the 2014 APPA awards the judges giggled and commented about the story being told. The mere fact the photograph illicited giggles speaks to the emotive content. The photograph subsequently received a Gold Award. 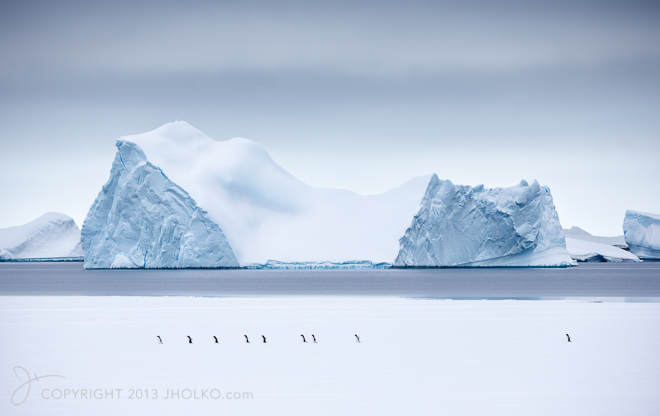 Now, if you put your thumb over the screen and cover up that lagging penguin then suddenly the story is now nowhere near as strong and the real power and emotion of the photograph is gone.

The same applies to the overall composition of this photograph. To the left of the large iceberg just out of frame is a large island. To the right hand side is a mountainous peak, likewise just out of frame; but neither of these elements are important to the photograph so I excluded them to simplify the frame and distill it down the essence of what I wanted the photograph to be about. I wanted to tell the story about the penguins on the ice with the little feller playing catch-up. Excluding these extraneous elements not only cleaned up the frame, but it also left the imagination to fill in the blanks about what might lie just to the left and right. Our minds eye fills in the blanks and at least in my own case I imagine the sea ice continually stretching out in both directions. This is far stronger than seeing the Island and mountain that are just out of frame.

There are some wonderful articles available on the internet about the art of seeing, the art of composition and creating emotive imagery and its worth taking some time out of your day to research them. Personally, I regularly listen to and enjoy the podcasts from Brooks Jensen over at Lenswork. I find his musings on creativity, art and photography insightful and useful in my own image making. David Ward who is a master of the intimate landscape has also written some excellent articles on this subject that have appeared in On Landscape magazine. I recommend subscribing to this magazine as it contains a great many excellent articles as well as countless examples of wonderfully emotive imagery.

Learning to see with better eyes is a core aspect to creating emotion in your imagery. Learning to use the elements available is another. Those who have travelled with me to the Polar regions know I relish bad weather. Snow, blizzards, and dramatic weather provides the perfect canvas to create emotive imagery. It doesn’t have to be Polar though – a breaking rain storm or the edge of weather will almost always provide an opportunity to tell an emotive story. The take-away to remember is that the weather provides only some of the feeling and drama to the photograph. It is your composition and choice of what you include and exclude that is going to tell the story. Remember, like all good stories, a photograph should leave the viewer wanting more. And that is the key to getting emotion and mystery into your photographs.

6 thoughts on “Landscape Photography with Emotion and Mystery”