Yesterday I wrote a post (Creating Landscape Photographs with Emption and Mystery) in response to a question I received from Scott via Social Media that really got me thinking about creating evocative photographs. In fact, it got me thinking about a whole lot more than just making emotional images and I realised this morning I only just touched on what I was feeling when I drafted yesterdays post.

I want to pick up where I left off yesterday by first talking a bit more about what I have come to term ‘Wow’ images. A ‘Wow’ image is my term for the sort of photography referenced in the ‘Will the Real Landscape Photography Please Stand Up‘ article by Ugo Cei. These are photographs that make us go ‘Wow!’ on first glance but that lack any real substance once you strip back the colourful facade and frankly cliché composition. Incidently, these photographs are almost always also devoid of any discernible style as Ugo notes in his article.

The immediate impression on viewing such a photograph is usually ‘Wow!’ as our senses are overwhelmed with a beautiful scene full of vibrant saturated colour; hence my terminology. However, ‘Wow’ quickly turns to ‘Whats Next?’ because there just isn’t any real substance, emotion or intrigue there to hold the viewers attention once they have absorbed the scene and colour. There is no question posed, no mystery, or intrigue and usually no emotion or story. Its a fleeting experience perfectly suited to the nano-second attention span that is the social media experience. We look at these photographs, we ‘Wow!’, we ‘Like’ and we move on (Yes, I do it as well). We move on because we have already absorbed everything the photograph has to offer. We have been wowed by its vibrant colour and the experience is complete. The problem is, a few seconds later the experience is not only complete, but its completely forgotten. Our brain has moved onto the next thing that has drawn our attention (often another Wow image). This is something I have come to term ‘Fast Food Photography’.  Its cheap, easy and devoid of nutrition.

If you read my post from yesterday you already know that I have a strong personal preference for images that contain mystery, intrigue, drama and emotion. Suffice to say that photographs that contain these elements are not only more interesting than Wow images (at least to me) but they tend to grab and hold the viewers attention much longer. Straight up, these photographs will not get as many ‘Likes’ and as many comments as ‘Wow’ images on social media. But that has nothing to do with the power of the photograph and everything to do with the fact that these photographs require the viewer to actually pause and use their brain – something that many on social media seem unwilling to do. However, those viewers who do stop to look at the photograph will spend more time with it and it will likely make far more of a lasting impression than the next ‘Wow’ photograph that will come and go a few million times more that day.

Making ‘Wow’ photographs requires little in the way of artistic skill (Sorry if that offends anyone, but its true). Turn up to a beautiful location, setup your tripod and camera, wait for good light and practice being a technician. The net result will be a Wow photograph. It isn’t hard. In fact, its downright easy once you posses the technical skills. Probably the easiest and best example I can think of is the long exposure pier photograph that must run the social media channel highway a few million times a day in various iterations. We have all done it. Many of us continue to do it and those new to photography will do it in the future. In fact, its almost a right of passage or could perhaps more kindly be considered part of the photographer’s growth curve. Yet there is absolutely nothing of substance to the image once you strip back the sunset colour and the pier’s leading line. Its a standard cliché composition executed by millions of people that really only differs in the quality of light on offer. And here is the rub; I can guarantee someone has been there before you in better light. There are many more examples I could use to illustrate this point (Mesa Arch at sunrise springs to mind). If all you want to do is make these sort of photographs then all you need do is practice being a technician. But what if you want to create more than that?

Lets look at a couple of photographs of mine that I will use to illustrate a point. These two photographs were taken within seconds of each other near the Weddell Sea in Antarctica in November last year during gale force catabatic winds. The first photograph is a pretty standard composition. Yes, there is drama in this photograph courtesy of the weather conditions, but the composition doesn’t really hold the viewers attention. Is it a Wow image? Possibly.. although I would like to think it has enough drama and emotion to hold the viewers attention a little longer. In fact, I liked it enough to make it my photograph of the month for January this year. I still like it, but I also think I took a better photograph a few seconds later.

This second photograph was taken just a few seconds later when I realised that this photograph should not be about the iceberg. Nor should it be about the ocean or the distant mountain partially obscured in cloud and fog. What this photograph was about was the jet trail like plume of snow being whipped off the top of the iceberg. This is where the real drama and emotion was to be found in this scene. The ocean is the stage, the distant mountain is the backdrop and the iceberg is merely a supporting actor. It is the vapour trail of snow that is the star of the show.

At the time I made these two photographs the decision to shoot the second image was a subconscious one. I knew I had captured the easy photograph – the entire scene; so I was now free to move on and ascertain what it was about the scene that was drawing me to photograph it. My subconscious took over and the result is the second photograph; which I personally feel, upon some reflection is a much more interesting image than the first.

It is the job of the photographer to dissect the scene through the viewfinder at the time of capture and to understand what should be excluded (See my post from yesterday about photography being a subtractive process). By cropping this image in camera I could much better focus the viewers attention on the real star, but still leave enough of the iceberg in frame to give context and create intrigue. We no longer know if this is a complete iceberg, or if its the edge of an ice shelf. We have left that decision to the viewer who will fill in the blank with their imagination. By comparison, the first image leaves nothing to the imagination and completes the story for the viewer – as a result its a ‘scene’. A dramatic scene, but just a scene nonetheless. In the second photograph we have still told the story, but we have excluded part of the iceberg to help fire the viewers imagination. We have given enough clues to help the viewer complete the scene in their mind without giving them just a pretty picture. In short, we have made them stop and think. Ultimately, it may well be a stronger photograph than the complete iceberg because it delivers a stronger message with deeper meaning.

I want to give one final example of how to achieve emotion in a photograph and it is one that comes courtesy of my six year old daughter. Last week she wandered into my studio as she is prone to do and asked me what I was doing whilst I was looking over a print I had just made. I told her I was looking at a print and she asked if she could see the photograph. Sure I said and turned the print to show her. This was the photograph in question. 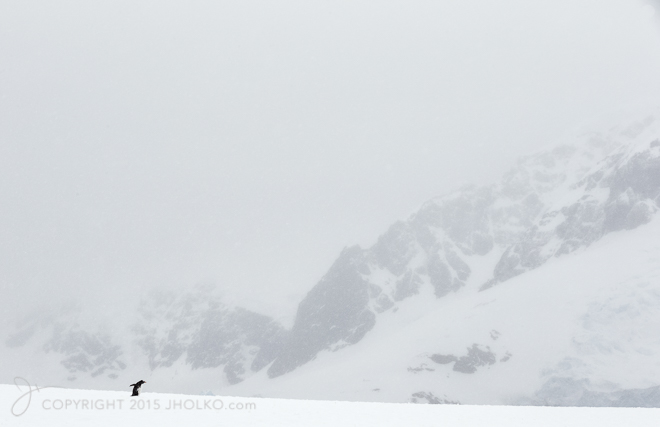 The first thing out of my daughters mouth after she spent a moment taking in the photograph was, and I quote: ‘The penguin looks sad Daddy“.

I smiled and asked her why she felt the penguin looked sad. She said, “Because he is all alone“.

As Yoda said – “Truly wonderful is the mind of a child“. My daughter nailed it.  And in one sentence understood exactly what this photograph was about – Solitude and loneliness.

I did not tell my daughter than just out of frame on the left hand side of the photograph there was an entire colony of over a hundred Gentoo Penguins going about their daily lives. It was not relevant to what I was trying to say with this photograph; so I excluded it from the frame. I wanted to give a sense of scale to this photograph and I chose to do so by framing just the one penguin in the corner with the huge mountains in the background. The heavy snowfall adds the magic element of drama and just a hint of mystery to this photograph, but it is the lone penguin set against the gigantic stage that carries the emotion.

In summary, I think it is worth thinking about what we are trying to say in our photography when we click the shutter and make a photograph. There is nothing wrong with wanting to create the Wow image (we all do it) and the world does need them for next years calendars and postcards. I challenge us all though, that we can do better and create more evocative photographs with deeper meaning if we just paused a little and thought about what we are trying to say with our photographs.

3 thoughts on “Landscape Photography with Emotion and Mystery Part Two”